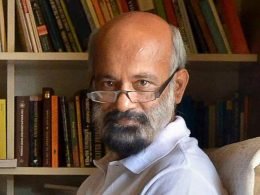 Agni Sreedhar is publisher and editor of the Kannada tabloid Agni. He recounted his experiences in the underworld in the bestselling Dadagiriya Dinagalu, which won the Karnataka State Sahitya Akademi Award. This book was translated into English as My Days in the Underworld. He has six other works to his credit, all of which have run into multiple editions. He also writes extensively on quantum philosophy and his book In the Path of Modern Mages, based on his personal experiences, is considered a classic in Kannada. A film based on his life, Aa Dinagalu, which he scripted with award-winning playwright Girish Karnad, received critical acclaim. His other films, Slum Bala, Kallara Santhe and Edegarike, also received popular and critical acclaim. Thamassu, on communal intolerance, which he scripted and directed, received the Karnataka State Award for Best Story in 2011. He is also actively involved in social causes.