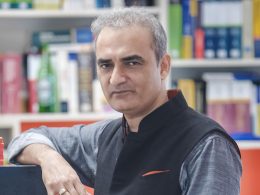 A Bird from Afar

Anshul Chaturvedi has been writing and editing to earn a living as a journalist for some 25 years, of which the last 21 have been with The Times Of India. He presently works as an Executive Editor with the Times Group, overseeing the cine and lifestyle space.

Apart from what the job needs him to scrutinize, he reads a lot about WW2, managerial theory, the philosophy of Vivekananda and Ramakrishna and the life of Subhas Bose.

He has so far authored four books:

The first was Uncut, a collection of his extensive interviews with the Three Khans of Hindi cinema. The second moved away from his journalistic work and came from years of observing why stress frequently trips young professionals: Work Sucks? Or Do You? The third was a longer project: The Vivekananda Handbook For Everyday Living – not a ‘religious’ book but a philosophical one, one that addresses our everyday challenges and not the mysteries of the universe.

Anshul has been an avid reader of World War 2 stories for as long as he can remember, for some inexplicable reason, and has been almost as fascinated with Subhas Bose as he is with Vivekananda. And it is from that combination of interests that his latest book, A Bird From Afar, has emerged; a piece of historical fiction set in 1942 that explores what could have happened if the war went differently for Germany and Subhas came to India’s borders not from the east in 1944, but from the west in 1942. And if, upon reaching India’s borders, he was unwilling to accept the journey towards partition as irreversible.

“Given that I have been almost an obsessive consumer of WW2 for decades, even as I read (and wrote a little) about Subhas, over time, the mind drew up its own stories, its conjectures, its responses to “what would Subhas had done if – ?”And at some points I searched for some such stories to read, stories such Robert Harris’s fabulous Fatherland, in the Indian context. A space to reimagine, reconstruct. I could not find much, perhaps because there is in any case so much mystery, intrigue and speculation about the details of his real life. And then, as it happened in the case of Vivekananda, I somehow ended up writing the book that I wanted to read.”