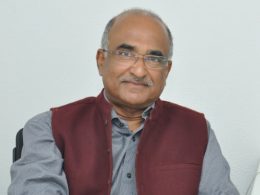 Over a varied career, Ashok has worked with captains of industry, commercial sex
workers, and women health workers in far-flung villages. In 2003, he left
McKinsey for the Gates Foundation, to create Avahan – an initiative to stem the growth of HIV in India. That program, Avahan, became the world’s largest ever private HIV prevention program, credited with averting over 600,000 new
infections (Lancet, 2013).

Ashok’s first book, “A Stranger Truth: Lessons in Love, Leadership and Courage from India’s Sex Workers (Juggernaut 2018)”, is a chronicle of his adventures with Avahan, in an India he never knew existed. The book has won many accolades, in India and abroad.

Currently, Ashok heads his NGO the Antara Foundation, working in mother and
child health. He has been a Senior Fellow at the Harvard School of Public Health,
and a health columnist with Mint, and Hindustan Times.