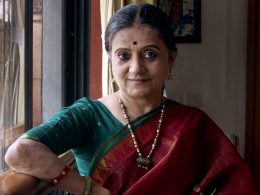 Bhawana Somaaya has been writing about Hindi cinema for more than 40 years.
She is a film critic, columnist and author of several books which includes biographies of Amitabh Bachchan and Hema Malini.
Once Upon A Time in India profiling 100 years of Indian cinema and other books are a point of reference for students studying cinema at Whistling Woods, Manipal University and now JNU, Delhi.
She has served on Advisory Panel of Film Certificate in India, is chairperson of Tigerland India Film Festival, Madhya Pradesh and on Advisory Panel for Dhai Akshar, Educational Centre for underprivileged children.
Conferred with Padma Shri in 2017 Somaaya is currently the Entertainment Editor at 92.7Big Fm Radio channel.
Keshava: A Magnificent Obsession is Somaaya’s fourteenth book and second offering to Lord Krishna.