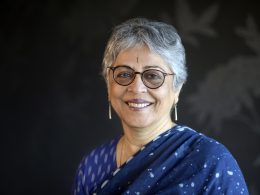 Brinda Somaya is an architect and urban conservationist. Upon completion of a Bachelor of Architecture from Mumbai University and Master of Arts from Smith College in Northampton, MA, USA, she started her firm Somaya and Kalappa Consultants in 1978 in Mumbai, India. In May 2012, she was conferred an Honorary Doctorate from her alma mater, Smith College. In 2014, she was awarded the Indian Institute of Architects – Baburao Mhatre Gold Medal for Lifetime Achievement. In 2015, she was honoured as Distinguished Professor by the Indian Education Society’s College of Architecture (IES), Mumbai. From 2016-2021, she was the Chairperson of the Board of Governors, School of Planning and Architecture, Vijayawada, an Institute of National Importance. In 2017, she joined the Board of the Holcim Foundation for Sustainable Construction, Zurich, Switzerland and was also elected as the A.D. White Professor-at-Large by Cornell University, U.S.A.

Over four decades she has merged architecture, conservation and social equity in projects ranging from institutional campuses, rehabilitation of an earthquake-torn village to restoration of an 18th-century Cathedral, showing that progress and history need not be at odds. Her belief that ‘The Architect’s role is that of guardian – hers is the conscience of the built and un-built environment’, underlines her work that encompasses large corporate, industrial and institutional campuses and extends to public spaces, some of which she has rebuilt, and others reinvented as pavements, parks and plazas.

She is the Founder Trustee of the HECAR Foundation which has brought out several publications on Heritage and Architecture. In 2000, she curated a conference, ‘Women in Architecture 2000’, and organized a seminal exhibition on the work of women architects, with a special focus on South Asia. In 2020, she chaired an international conference ‘Women in Design 2020+’ a landmark event for women designers from across the globe to showcase their work as well as provide a platform to collaborate. In 2018, with MAPIN Publishing and the HECAR Foundation, she brought out a monograph ‘Brinda Somaya – Works & Continuities’ covering her diverse practice.

Brinda Somaya was on the IAWA board of Advisors (International Archives of Women in Architecture), U.S.A. She has delivered analytical and critical talks as well as presented papers in India and abroad on her work. She has lectured extensively in the U.S.A, U.K., Australia, Pakistan, Sri Lanka and India, and her work has been exhibited in the USA, UK, and Japan.