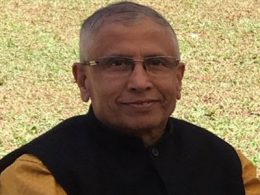 D.V.Guruprasad, born in Bengaluru, completed his B.Sc from Bangalore University, and did his Masters in English Literature from Karnatak University topping his batch. He joined the Indian Police Service in 1976 and was allotted Karnataka cadre. While working as Superintendent of Police, he obtained his Ph.D degree. (The Letter in Indian Writing in English)

He served as Superintendent of Police of three communally sensitive districts (Bidar, Gulbarga, Kodagu), DIG of Gulbarga Range apart from being the Commissioner of Police of Hubli-Dharwad where he succeeded in giving a healing touch to the people, after the vexed Idgah Maidan dispute. He was one of the very few officers to head both the State CID and State Intelligence wings. He worked as Intelligence Chief under three Chief Ministers of different Parties which is a rarity. He has also worked in the CISF at New Delhi.

As Addl DGP, Recruitment and Training he was responsible for recruiting over 750 PSIs and 16000 PCs in a most transparent manner. He was responsible for establishing a separate cadre for Sis in Int. He has undergone professional training in the UK and Israel. He has specialized in Security, Criminal investigation, and law and order.

He has worked in several non police organizations like the Road Transport Corporation (Director, Traffic and Director Security and Vigilance) Director and Head of the State Information Department. After his retirement from the IPS as DGP in 2011, he was the CEO of the MSRamaiah group of institutions in Bangalore for 7 years.

He was a Visiting Professor of Criminology in Rani Chennamma University, Belagavi. He regularly gives lectures in several Universities and training institutions. He is a guest lecturer at ATI Mysore and KPA Mysore. He is a recognized trainer of Govt of India.

Dr Guruprasad is a bilingual writer and has written over 1000 articles in various newspapers and magazines. His columns have been carried in almost all Kannada newspapers. The subjects of his writings are humour, travel, law and Police. He has so far published 60 books (55 in Kannada and 5 in English). He has written case studies for the police.

Guruprasad is an avid traveler. He has visited over 53 countries so far. He lives in Bengaluru with his wife, children and grandchildren.