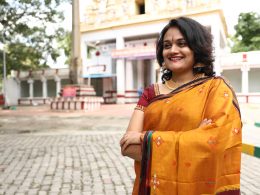 Dr. Deepti Navaratna is a musician and neuroscientist whose research interests span neuroscience, arts and history. She is a Chevening Clore Fellow (2021-22), recognized as one of the most creative artists and dynamic cultural leaders across the globe. Her musical career has charted many firsts: she is the first Indian woman to have performed at the Parliament of World Religions in 2021; first Indian classical musician to have received a scholarship to study world music at the New England Conservatory of Music in 2012 – to name a few. Her music has been presented at premiere performing spaces across the globe such as the Asia Society (New York City), Symphony Space (New York City), Jordan Hall (Boston), Harvard Arts Museum (Cambridge), Museum of Fine Arts (Boston), Central Conservatory of Music, Beijing, Indian Council for Cultural Relations, Srilanka, among others. From South Indian classical music to avant garde to world music, her music embodies a rare mix of versatility, classical wisdom and virtuosity that is distinctly her own. She is an A-grade artist of the All India Radio since 2001, consequent upon winning the AIR National Award in 1999 and 2000. She has released four albums of Carnatic classical music; Bharataratna C.N.R Rao released her album ‘Echoes of Royal Mysore’ – featuring rare kritis of Mysore Maharaja Jayachamarajendra Wadiyar. She has received several distinctions such as the India Foundation for the Arts – Research Grant (2016), Cambridge Arts Council Arts Grant (2011 & 2015), Emerging Artist Award from St.Botolph Foundation (2011) and the Traditional & Ethnic Arts Fellowship from the Utah Arts Council (2009), among others. She is the director of ‘The Carnatic Alchemy Project’; a non-profit organization dedicated to taking South Indian Classical music to diverse audiences across the globe. In a parallel avatar, Deepti holds a doctorate degree in Neuroscience, spent several postdoctoral years at the Harvard University, Cambridge, USA and has authored over twenty original scientific research papers to her credit. Until recently, she served as the Regional Director, Indira Gandhi National Centre for the Arts, Ministry of Culture, Government of India, Bengaluru, India. When she is not studying the brain or singing, she enjoys consuming and writing about history.