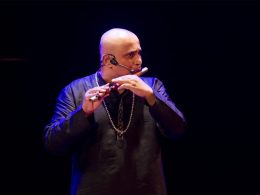 Annada Prasanna Pattanaik (popularly Known as Flute Butto) is one of India’s foremost flutists of north Indian (Hindustani) style. He learnt the fundamentals of Raga with Professor M.M. Patnaik in Bhubaneswar, India. Then in Mumbai he learned the finer aspects of raga, improvisation and creativity under the tutelage of Pandit Hariprasad Chaurasia, the greatest flute maestro of India. Many of his music albums have been released internationally. They include Deep Sky, Igneous, India songs (recorded and released in Holland), Expanding Horizons (recorded and released in USA), Mesmerising Flute (done in collaboration with Grammy award winner Ricky Kej) etc. His internationaly released Hindi Album ” DHUNDLI SI YAADEIN “(iTunes Link: https://itun.es/in/WwIAcb) has created great impact on the world music scenario. Butto is also a big name in the Indian film Industry, having played for more than 1000 Indian movies, some of them have got National awards. In recent times Butto is a popular face on MTV, having performed in MTV Coke Studio (where his collaborated performance with AGAM got the highest viewers award 2011) and also in MTV unplugged with Lucky Ali. Butto has been a part of the Lucky Ali Band for ten years.