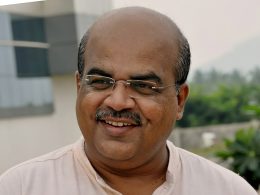 G N Mohan is a senior Journalist and noted author who has an illustrious career as a media professional, publisher and author.

His passion for literature and theater helped him skillfully blend the nuances of literature with journalism in a career spanning about three decades. Mohan is one among the few media professionals who have left an imprint on print, radio, television and digital media.

He started his career as a reporter with Prajavani Kannada daily and later moved to television journalism. As editor and senior editor, Mohan led three television news channels- the ETV Kannada news, Samaya 24X7 news and the News 18 Kannada Channel. He was invited to Atlanta by CNN Channel as part of their International Professional Program and has been recognised by CNN as a member of Television journalists dedicated to worldwide free flow of information.

Presently Mr Mohan is working as Editor in Chief of Avadhimag- the popular e-magazine on Kannada literature and culture. He founded avadhimag.in, a unique digital magazine in Kannada in the year 2008 and in the past 14 years, Avadhi has established itself as a platform to nurture new literary talents and promote Kannada language and literature across the globe. Avadhimag is the only digital magazine that bagged the prestigious Karnataka Sahitya Academy Award for excellence in literature and digital journalism.

Mr Mohan is also a Karnataka Sahitya academy, Nataka academy, Media academy award-winning writer and has penned more than 20 books that include poetry, memoirs, essays on media and current affairs and analysis. The Karnataka govt has recognised him for his contribution to development journalism.