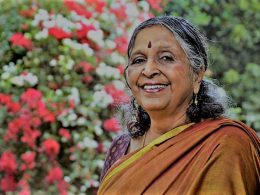 Gita Aravamudan is a journalist and author who started her professional writing career at the age of 20 as a trainee with Hindustan Times Delhi in 1967. When she was 21 she became a full-fledged reporter for Indian Express Bangalore…the first woman reporter in the city. She free-lanced for a long, long time, writing for a wide range of English language publications from all over the country and abroad. She has also won a couple of national awards for her writing.

Her book of narrative journalism “Baby Makers: The Story of Indian Surrogacy” (Harper Collins 2014) the first ever comprehensive book on the subject has received excellent reviews and has been translated into Japanese.

Her book “Disappearing Daughters: the tragedy of Female Foeticide” (Penguin 2007)(translated into Marathi & Japanese) was released by President Abdul Kalam at Rashtrapathi Bhavan and won the Laadli Award for Gender Sensitivity in 2012.

Her other books “Colour of Gold” a mystery novel set in an Indian gold mining town (Harper Collins in 2013), “Unbound:Indianwomen@work” (Penguin 2010), “The Healing” a novel set in Chennai (Harper Collins 2008) and “Voices in My Blood” (Sterling Publishers 1997) (translated into Tamil) have all been very well received.

She co-authored “ISRO: A Personal History” (Harper Collins 2017) with her husband R. Aravamudan an ISRO pioneer. This has already gone into second reprint.

Gita continues to for various online publications on current issues.