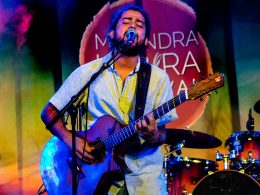 His music is an act of poetic subversion… he creates a bridge between the written word and music
— Scroll.in, July 2018
Harpreet is a versatile artiste, who sings original musical compositions in Hindi, as well as, in regional Indian languages and dialects such as Punjabi, Bengali, Assamese, Rajasthani and Haryanvi.

Harpreet has gained critical acclaim for his light classical style of singing. His creative talent fuses both the modern and traditional when composing tunes to his own lyrics and for classical poetry that he loves.

He is best known for creating musical scores to epic works of humanist poets like Kabir and Bulleh Shah. Credited for taking celebrated poets to the masses, Harpreet has also composed popular hummable tunes to words of poets such as Pash (Avtar Singh Sandhu), Faiz Ahmad Faiz and Nirala (Suryakant Tripathi). The rhythmic blend of soulful poetry to the pulsating sounds of guitar and percussion are at once unique and innovative, familiar and foreign. On his musical journey with poetry, he has delivered a TEDx talk in Jaipur in 2016

The progressive elements of his artistic practice is not confined to poetry alone. His original composition, Kutte (dog) – a song about a canine’s view of human life — was selected by award-winning Bollywood film director Dibakar Banerjee and Kanu Behl for a Yash Raj Films production called Titli.

Some of his yet-to be-released compositions — Geet Aur Shabd, Kho Gaye He Wo and Ye Jo Pal Hai — have received wide appreciation in festival circuits.

His graceful compositions, simple sonorous delivery, combined with a pleasing personality and stage presence, have touched a chord with the audience.