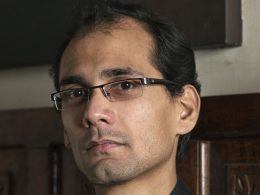 Indrapramit Das (aka Indra Das) is a writer and editor from Kolkata. He is a Lambda Literary Award-winner for his debut novel The Devourers (Penguin India / Del Rey), and has been a finalist for the Shakti Bhatt First Book Prize, the Crawford Award, and the Shirley Jackson Awards, among others. His short fiction has appeared in publications including Tor.com, Clarkesworld and Asimov’s Science Fiction, and has been widely anthologized, including in several Year's Best collections. He is an Octavia E. Butler Scholar and a grateful graduate of the 2012 Clarion West Writers Workshop. He has lived in India, the United States, and Canada, where he completed his MFA at the University of British Columbia.