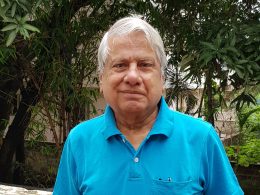 Jagdish Raja and his wife, Arundhati Raja are the founders of JAGRITI.

Jagdish started his working life as an apprentice printer in London. He is a Graduate Member of the Communication Advertising and Marketing (CAM) Education Foundation, United Kingdom and an Associate of the Trinity College London (ATCL). He returned to India and joined Asia Publishing House in Mumbai then Bombay and and then as an Executive Trainee at S.H. Benson (now Ogilvy). He returned to England and after closing, Pan Communications his London consultancy, came back and settled in Bangalore in 1973.

Jagdish consulted for advertising agencies in the city culminating as Communications
Advisor to ActionAid, the then second largest rural development.