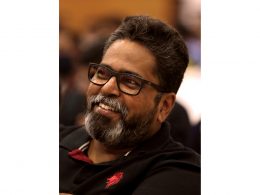 Girish Rao Hatwar is popularly known with his pen name Jogi. It is the name coined by the first letter of his wife Jyoti and his name first name Girish. He is basically from South Canara, Karnataka presently residing in Bangalore for the last few decades.

Though he has a degree in commerce he chose to pursue journalism professionally. Writing, which started as a hobby, is his great passion today. He has authored 74 books so far which include 17 novels,19 short stories collection, 21 articles collection, 2 Plays, one book on Cinema, Screenplay and Direction, one book on storytelling and a few biographies.

In his splendid journey as a versatile writer, he has penned down various literature works, some of which are worth mentioning here. His column ‘Life is beautiful’ prompted a huge number of youngsters to pick up reading as a hobby. He was able to stunningly capture the pleasures, pains, apprehensions and perplexities of the city in words, in Five Volumes on Bangalore Metro City. He took his readers by a pleasant surprise with a different style of narrative with his novel L and Ashwatthaman. It secured a special place for him in the list of Kannada novelists.

He has also been a popular screenplay writer, story writer and director with more than a 80 television series and Five Movies in his credit so far. In the last Twenty-Five years, he has been actively writing columns for Kannada magazines. He has contributed immensely to the Kannada literature not only by writing but also by engaging himself with several activities like excursions, panel discussions, theatre, quality time with friends, reading clubs, mentoring new and young writers, brainstorming and being an cultural tastemaker. His plays have been performed at various theatres including NeeNaSam and others in Bangalore and Mysore cities.

Presently he is the Chief Magazine Editor, Kannada Prabha.