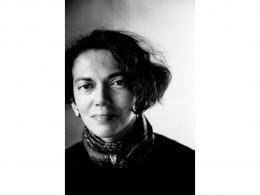 Poet, librettist and dance producer, Karthika Naïr is the author of several books, including The Honey Hunter, illustrated by Joëlle Jolivet and published in English, French, German and Bangla. Until the Lions: Echoes from the Mahabharata, her reimagining of the Mahabharata in multiple voices, won the 2015 Tata Literature Live! Award for Book of the Year (Fiction) and was shortlisted for the 2016 Atta Galatta Prize. She was also the principal scriptwriter of DESH (2011), choreographer Akram Khan’s dance solo; its family show-version Chotto Desh (2015); and Until the Lions (2016), Khan’s adaptation of one of the chapters of her book.

In Naïr’s résumé as a dance enabler, one finds mention of Sidi Larbi Cherkaoui, Damien Jalet, Käfig/Mourad Merzouki, two Olivier award-winning productions (Babel(Words) and Puz/zle), Festival d’Avignon, the Louvre, the Villette, the Shaolin Temple in Henan, misadventures with ninja swords and pachyderms, among others, many of which materialise under various guises in her poetry.