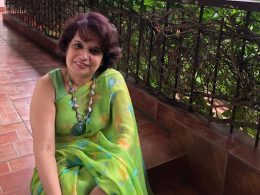 Nayika: Women of Myth and Mystery

Kavita Kané is the best selling author of six novels and today, she is considered a revolutionary force in Indian writing mainly because she has brought in feminism in where it is most needed – mythology.

For one who confesses that the only skill she knows is writing, her word journey expectedly, began as a journalist, with twin post-grad degrees in English Literature and Mass Communication & Journalism from the University of Pune. With a career of over two decades in Magna Publishing and DNA, she eventually quit her job as Assistant Editor of TOI to devote herself as a full time author.

Passionate about theatre, cinema and the arts , she is also a columnist, a screenplay writer and a motivational speaker having given several talks all across the country’s educational and research institutes, corporate and management fora and literary festivals.

Born in Mumbai, with a childhood spent largely in Patna and Delhi, she lives in Pune, with Prakash her mariner husband , two daughters: Kimaya and Amiya, two dogs: Chic and Beau and Cotton, the uncurious cat.