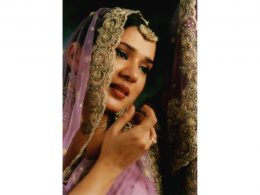 The Diva of classical dance, the creator of Sufi Kathak and the restorer of the
dance of Tawaifs.
Classsical Dancer, Director & Choreographer, TedX Speaker, Cultural Academia

Manjari Chaturvedi, the leading exponent of classical dance in India, is an unusual dancer, she has blazed her own path, that no one traversed earlier, in the field of performing arts. She has taken the traditional form of Kathak to a different level altogether and has created her own style, her own brand of dance.
Her productions as a dancer are projects that are meticulously researched, documented, as she first studies the original traditions and then finds her own
artistic expression of the subject and that expression is always unique, as never
seen before, as she pours her heart and soul into the dance. Manjari has extnesively worked on gender sensitive subjects through her medium of dance, exploring the many traditions woven into poetry, music and dance.

THE COURTESAN PROJECT by MANJARI CHATURVEDI
She is the founder of concept The Courtesan Project, which has become one of the most successful dance revival movement in today’s time. Giving a voice to the women and 100s years of creative contribution to theatre, cinema and performing arts, the Courtesan Project is recognised, loved and appreciated globally for its unique story telling and the highlights the forgotten legends of music and dance.
Manjari Chaturvedi has taken her obsession with classical dance and turned it into more than expression: in her hands, it is cultural renaissance and syncretism; narrative form and dialogue.
Nothing is more evocative of this than “The Courtesan Project”, a unique research and documentation exercise via which Manjari seeks to chronicle the historically remarkable role of the ‘tawaif’ in artistic life: as muse to poets and painters, writers and kings, musicians and leaders.
And in so doing, she seeks to claim for these maligned women the reverence due them for their learning and their performance art; their intelligence and wit; their talent and raw sensual power."
This project is a medium to draw the attention of the society towards our erstwhile courtesans and how discriminatory practices impacted NOT only their life but also of their families. Thus, advocating and creating much required space for them as an ‘artist” in the society through cultural activism and social change..

This is an exhaustive research as it brings alive dance and stories of women who were stigmatised by the society for being performers both music and dance and in an unfortunate society ridden by gender discrimination were not even part of the documentation history of the performing arts.

Hence it becomes imminent we tell their brilliant stories to the world and show their their art, their music, their dance. This is a part of the gender in arts, and how the gender of performer shapes the art for future. Those forgotten dancers called tawaif & nachnewali who do not find space in the documentation of performing arts, whereas their counterpart men performers are referred to as "Ustads" and the incredible women merely as "Nautch Girls". These were the women who moved from the Kotha and formed the part of the Parsi theatre and then subsequently were the first women performers for the big Hindi Film Industry. And their contribution to art largely remains un acknowledged. This project brings their art to the foreground.

Tehzeeb-E-Tawaif (New Delhi & Mumbai)
“Gender discrimination in performing arts and how this shapes the art for future vis a vis the Tawaif and Baiji women performers of 18 th -20 th century”
The seminar is an academic initiative proposed to create awareness, preserve and promote the intangible cultural heritage of the erstwhile tawaifs and the importance and role of women performers in the shaping of the process of preservation and promotion of the intangible cultural heritage. The seminar through lectures and discussions served as an academic initiative, and also introduced to the youth an alternative narrative about the brilliant women performers, about whom till now they have only heard derogatory words which are largely Bollywood driven