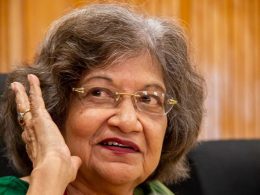 Equally proficient in Hindi and English, Mridula Garg has written in almost every genre in Hindi; 8 novels, 4 plays, 4 collections of essays, 1 memoir of fellow writers, 1 travel account and 90 short stories. Her latest work is a novel in English called The Last Email (December 2017)

Her work displays a wry sense of humor and self reflection. She does not adhere to traditions, Marxist, feminist or region specific. The familiar turns unpredictable as she discards stereotypes to use irony to elucidate the axiom, I am my choices. If a book makes people angry yet does not allow them to put it down and ultimately forces them to rethink, it is probably written by Mridula Garg.

Among other awards, her novel, Kathgulab got the Vyas Samman in 2004 and Miljul Mann, the Sahitya Akademi Award in 2013. She received the Hellman-Hammet Grant from The Human Rights Watch, New York in 2001, and Ram Manohar Lohia Samman from U.P Hindi Sansthan in 2014.