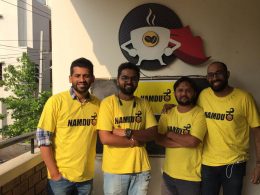 NamduK works with the vision to create a platform for new generation Kannada comedy and entertainment, ‘Online’ and now also ‘Offline’!
Started as a YouTube channel 5 years ago, now has 70+ videos and 19K subscribers. NamduK has created contents mainly in the comedy genre with mockumentaries, sketches, theatrical trollers, etc. It’s one of the oldest Kannada YouTube channels, that’s run by few IT professionals with team of 15+ young professionals from diversified background. The team members work during the weekends and leisure, just to pursue their passion and thus contributing it's little to make ‘digital content’ in
Kannada. The team has broken its boundaries by welcoming many new talents and also worked with some of the leading filmmakers and artists.

Recently the team is working on establishing a Stand-Up Comedy team in Kannada. It has conducted Kannada stand-up comedy open-mic, to help new and old comedians to reach the audience to try their new materials. More than 40 comedy enthusiasts have performed in these events.

In the future, the team wants to continue in the stream of digital media and entertainment, and also welcomes the opportunities to collaborate with different teams, to make people laugh! It’s a situation where NamduK needs more hands, to clap, to hold, to pick them up when they fall, to assure, to punch when they make mistake, to hit ‘subscribe, share, comment’, and to make a complete promise of contributing to the beautiful language “Namdu-Kannada”!!