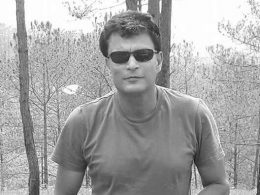 Paramjit Bakhshi, an English Honours graduate from St. Edmund’s College , Shillong, has worn many hats. Starting out in National Defence Academy which he left after an illness, he has been a tea planter and a consultant, an entrepreneur, a life skills trainer, but also writes poems, columns and stories. A proverbial rolling stone he insists that this is prevented him from gathering the proverbial moss but gave him a certain shine.