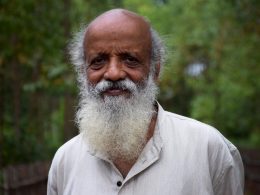 Prasanna, theatre director, writer and activist, is one of the pioneers of modern Kannada theatre. He co-founded the influential theatre group, Samudaya, in the 1970s. He has directed plays in Kannada, Hindi, Punjabi and English for various theatre repertories including National School of Drama, New Delhi, Rangmandal, Bhopal and Rangayana, Mysore. He has written several plays in Kannada including Tadroopi and Haddu Meerida Haadi and has recently adapted Gandhi’s
Hind Swaraj for Kannada theatre. He has also written Desiya Jeevana Paddati (The Practices of Desi Life, 2005), Yantragalannu Kalachona Banni (Unclasping Ourselves from Machines, 2009), Desiya Aaahara Paddati (The Traditions of Desi Food, 2013) and Indian Method in Acting (2013), a pioneering effort at interpreting the methods of modern Indian theatre. Few months back Prasanna
bought a Part-I of "Moola Ramayana", which he constructed around a metaphor Prakruti-Purusha, Man-Civilization as a solution to the contemporary civilizational crisis we are facing today.

Prasanna is also founder of Charaka, a women’s co-operative in Bhimanakone, whose products are found at Desi outlets in Bengaluru and elsewhere in Karnataka, and a co-ordinator of the various satyagraha's for handloom, handmade and recently started satyagraha for sacred economy.