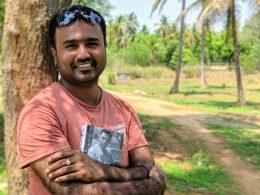 Rajendra Prasad Was born on 19 March 1987, at Kodavaththi village lying on the border area between Mandya and Tumakuru districts of Karnataka state in the southern part of India. He completed his master’s degree in Commerce from University of Mysore. He lives in Mandya.
He runs a small business to earn his livelihood. He has been writing-studying literature with special emphasis on poetry, Carnatic music, history, Buddhist studies, Zen paintings, philosophy and culinary art. A widely read new-generation Kannada poet, Rajendra is also the editor and publisher of popular Kannada literary magazine ‘Sankathana’.