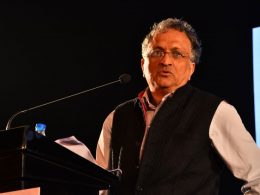 Getting to Know Gandhi: A Biographer’s Journey

Ramachandra Guha has taught at Yale and Stanford universities, the University of Oslo, the Indian Institute of Science, and the London School of Economics. His latest book is Gandhi: The Years That Changed the World, 1914-1948. His earlier books include the award-winning India After Gandhi, and the first volume of this biography, Gandhi Before India which was a 2014 New York Times Notable Book, and a San Francisco Chronicle Best Book of the Year. He writes regularly on social and political issues for The New York Times, and for the British and Indian presses, including The Telegraph and the Hindustan Times. He lives in Bangalore, India.