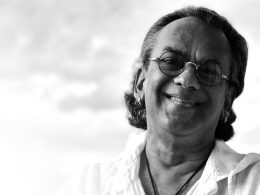 Remo: A Life in Words

Remo Fernandes was born in Goa and grew up there in the 1950s and 1960s. He studied architecture in Bombay, busked and hitch-hiked his way through Europe and North Africa as a young man, and returned to Goa in his mid-twenties, with a resolve to pursue only the things he loved: music, art and writing.

His success with his first home-produced albums led to widespread fame and stardom. His chartbusting film songs and his albums were landmark hits for a generation of listeners. His innovative musical journey continues to this day: he recently composed and recorded a full-fledged opera on Mother Teresa.

Now in his late sixties, Remo divides his time between his ancestral home in Siolim, Goa and Porto in Portugal.