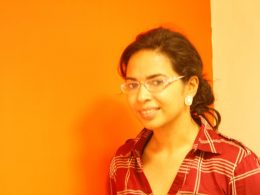 Samhita is the author and illustrator of The Mahabharata – A Child’s View. More recently, she collaborated with artist Moyna Chitrakar on the New York Times bestseller Sita’s Ramayana. Last year, Arni’s third bookThe Missing Queen,was published jointly by Zubaan and Penguin in India. Elle Magazine named Arni as one of twenty young upcoming South Asian writers to watch out for.

Arni was a scriptwriter for “Rafina”, a feature film directed by Pakistani filmmaker Sabiha Sumar, and worked for six months in Kabul on the script for “The Defenders” a 13-part television series that aired in Afghanistan.