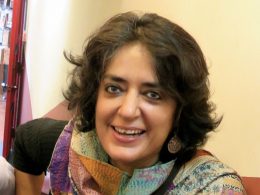 Shabnam initiated the Kabir Project journeys in 2002 and has since been exploring the philosophy of Kabir, Sufis and other mystics through a deep engagement with their oral folk traditions. Her inspiration and joy in this poetry has taken the shape of 4 documentary films on Kabir, a digital archive called Ajab Shahar, translations and curations, urban festivals and rural yatras. Shabnam sings and performs this poetry herself and also enjoys teaching and infecting students with the challenge and wonder of mystic poetry. Her work at the Kabir
Project is located in Srishti, Bangalore.

Her film 'Kabira Khada Bazaar Mein' won the Special Jury prize at the 52nd national film awards in 2011. Her books include 'I Saw Myself: Journeys with Shah Abdul Latif Bhitai' published by Penguin and 'One Palace, a Thousand Doorways: Songlines through Bhakti, Sufi and Baul Oral Traditions' published by Speaking Tiger (both co-authored with Vipul Rikhi). She is currently working on a book on Kabir to be published by Aleph.

In earlier years she has worked on gender and human rights issues through journalism, video and radio work in the community.