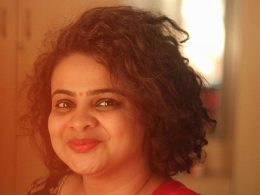 Having been a Media professional in Mumbai for 9 years, Shruti Rao had worked in a variety of media content including feature films, ad films, business news, lifestyle television and more recently digital content production, She bid farewell to her long-standing career in Media, and came back to Bangalore to pursue her Masters at Srishti School of Art Design and Technology in Bangalore and graduated with a specialization in Knowledge Systems and Practices. She is interested in sound editing and podcasting; having written, edited and produced a Audio Documentary & Podcast called ‘Okay…Smile Please!’ about the presence and participation of babies and kids in the Mumbai Advertising Industry. Five months ago, she joined Shilpa at Cubbon Park in the mornings to learn the folk songs and stories with UFP. Having a natural interest in percussion instruments, Shruti picked up playing the Chowdki, the percussive accompaniment to the single string instrument called the ‘Shruti’. She has since then been a part of Urban Folk Project, touring and performing with the band.