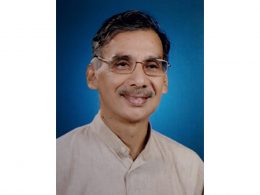 Havyaka Kannada: The Many Language Worlds of Karnataka

He has 37 years of teaching experience, 15 years in undergraduate and 22 years in postgraduate teaching. He has successfully guided 17 PhD theses and 18 MPhil dissertations. He completed three major UGC research projects (1988-91, 1994-97, 1998-2001). He has written 58 research papers and 18 books in Kannada. His recent publications are Bouddhayana (2005) and Hanatege Hani Enne (2007). He was the Co-Editor of the Complete Works of V.K. Gokak published by the Karnataka Sahitya Academy.

His awards include the Gorur Sahitya Prashasti for Muttina Sattige (2002), the Karnataka Sahitya Akademi Award for Bouddayana (2006), the Guru Narayana Sahitya Prashasti (2009) and the Sediyapu Prashasti (2011). His students and colleagues have published a felicitation volume on his work titled Ayana (2013).

He has visited German universities under a cultural exchange programme in 1993 for 3 months and participated in the International Dravidian Conference at Stuttgart in May 1993. He was the former President of the Maharashtra State Unit of the Kannada Sahitya Parishat 1992-95; Member of the UGC Visiting Committee and Member of the Subject Panel for the UGC and UPSC; President for the “Jagatika Karnataka” session of the All India Kannada Sahitya Sammelan, Mangalore (1997); and President of the 17th Kannada Sahitya Sammelana of Dakshina Kannada district (November 2011).