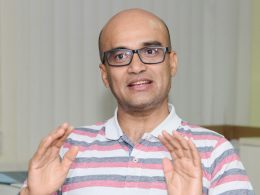 Vasudhendra is an Indian author and writes in Kannada. He is known for his short stories and novels. He lives in Bangalore, India.

Vasudhendra has been publishing prolifically in Kannada for over twenty years. He hails from Sandur of Bellary district in Karnataka. A graduate of NITK, Suratkal and an ‘ME’ from the Indian Institute of Science, he worked for software industry for over twenty years and now devotes his time mainly to traveling, studying, writing, and publishing. He is the first openly gay litterateur in Kannada.

Short stories and essays are among his largest contributions; “Nammamma Andre Nangishta,” (I like my mother) a collection of personal essays has been so popular that it has seen twenty one reprints. “Mohanaswamy” a collection of stories dealing with the life of gays and their pain and pleasure has been subject to extensive critical review among literary enthusiasts in addition to being translated into Spanish, Malayalam, Telugu, Marathi, Hindi, and Tamil. His latest publication, “Tejo-Tungabhadra,” a novel resulting from extensive study of Indian and Portuguese history of more than five centuries ago has been a subject of extensive debate and critical appreciation

Vasudhendra is a recipient of Sahitya Akademy award “Sahitya-Shree” and many more. He has established a publication “Chanda-Pustaka” which he uses for introducing young and new writers in Kannada as well as to publish and market his own writings.