Alchemy of Sounds and Strings In a concert “Alchemy of Sound and Strings” – A Duet of Sitar and Indian Cello, the accomplished musicians perform together with Shri Sapan Anjaria on Tabla.

Being thinking musicians through their creations and compositions they are constantly endeavouring to carry their instruments beyond conventional boundaries and build musical bridges to many cultures. Their renderings exemplify the very best of musical traditions of the East and West.

As music educators they are tirelessly working to revolutionise music education in India, by making it accessible to all children. They encourage and empower children and their communities through their rich cultural heritage. 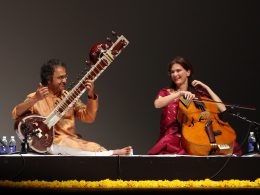 Pandit Shubhendra Rao is an internationally acclaimed performer, composer, cultural entrepreneur and music educator. His relentless service in promoting Indian music has made him a highly respected figure in the field of music and education across the world. A protégé of Bharat Ratna Pandit Ravi Shankar, Shubhendra Rao has established himself “not only as a master of his instrument but also as a thinking musician, constantly endeavouring to carry his instrument beyond conventional boundaries” and “a musical bridge to many cultures” Critics and connoisseurs hail him as a worthy successor to his Guru’s tradition. Internationally, he has performed at major music festivals and prestigious concert halls like Kennedy Center for Performing Arts, Sydney Opera House, Salzburg International Music festival, National Centre for the Performing Arts in Beijing, National Arts Festival in South Africa, BRICS Summit in China, Theatre de le Ville in Paris. In India, Shubhendra Rao has performed at major music festivals in India including Doverlane Music Conference, ITC Sangeet Sammelan, Baba Harvallabh Sangeet Mahasabha, Shankarlal. 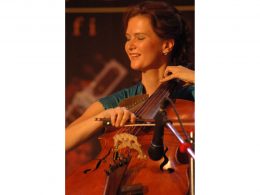 World-renowned cellist, composer, arts educator and writer Saskia Rao de Haas is a pioneer in the world of music. She is the creator of the Indian cello which is described as ‘string instrument that has a beauty unlike any other'(Edinburgh Festivals). Pt Hariprasad Chaurasia said about Saskia that ‘she has been taught by God and everyone should listen to her music.’ As the co-creator (together with Pt Shubhendra Rao) of the Sangeet4All music curriculum, India’s first music curriculum for children from 2 years old onwards, Saskia has written 8 books for children about music and is passionate about bringing classical music to children. She loves telling the stories of her books in ‘Sangeet Aur Katha’ while playing her unique cello.