A performance by Revanta Sarabhai

Revanta’s contemporary approach to the traditional pandanallur-style margam breathes fresh life into an ancient tradition. Telling stories of long-distance relationships, the environment and its destruction, and globalisation through Bharatanatyam, the artist shares his creative journey while showcasing some of his newest work that has enthralled audiences in India and abroad. 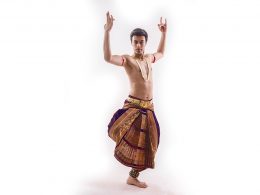 From Cosmic Dance to Climate Change →