So Who Wants to be a Space Scientist? 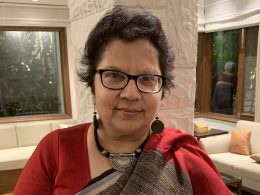 Minnie Vaid has juggled multiple roles in a three decade stint in mainstream media. She is a print and television journalist, a documentary film maker, former creative producer for feature films and more recently, author of four non-fiction books. Her chosen areas of interest include social and political issues in rural India, human rights, the environment and gender-related topics.

Her first book,’ A Doctor to Defend: the Binayak Sen Story’ (translated in four regional languages) was launched in Delhi by Prof Amartya Sen in January 2011, while the second ‘Iron Irom : Two Journeys ‘was launched in Mumbai and Delhi by Abhay Deol and Sharmila Tagore respectively. Her third book, ‘The Ant in the Ear of the Elephant: the story of the people’s struggle against the Koodankulam nuclear plant’, was launched by Nandita Das in Mumbai in 2016.