The Grass is Red on The Other Side 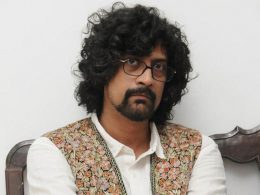 Born in 1965 in Calcutta, Gautam Benegal graduated from Jadavpur University taking his degree in Comparative Literature. From his early years he showed a marked aptitude for graphic arts. At age sixteen at the invitation of Satyajit Ray, renowned director and editor of the children’s magazine “Sandesh”, his illustrations and articles regularly appeared in Sandesh and subsequently other children’s magazines. In 2010 he made the one hour animation film “The Prince and the Crown of Stone” which won two Rajatkamal National Awards.

Gautam has written two books of short stories 1/7 Bondel Road and The Green of Bengal, for Wisdom Tree and Harper Collins respectively.

He has also written and illustrated “Tales from Bengal” a translation of Upendrakishore Ray Choudhury’s “Tuntunir Boi” published by OM publishers. The book received the All India Publisher’s Guild Award in 2016.

He is at present Animation Faculty in Srishti Institute of Art Design and Technology, Bangalore.