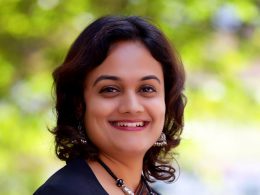 Dr. Deepti Navaratna is a musician-neuroscientist-author whose interests span the arts, science and history. An accomplished South Indian Classical musician, her music has been presented at premiere performing spaces in the United States such as Asia Society (NewYork City), Symphony Space (New York City), Jordan Hall (Boston), Harvard Arts Museum (Cambridge), Museum of Fine Arts (Boston), Yale School of music (New Haven, CT), Indian Council for Cultural Relations (ICCR) Srilanka, Central Conservatory, Beijing and Tsing Hua University, Taiwan among others. In a parallel avatar, she studies music as a fascinating window to the brain, mind, human cognition and culture – as the T.V.Raman Pai Chair Professor at the National Institute of Advanced Studies, Bangalore. Deepti holds a doctorate degree in Neuroscience, after several years of post-doctoral research at Harvard Medical School, USA, her current research interests span the interdisciplinary crossovers between music and neuroscience. She is a Chevening Clore Fellow (2021–22) and holds the distinction of being the first Indian woman to have performed at the Parliament of World Religions in 2021. Until recently she served as the Regional Director, Indira Gandhi National Centre for the Arts (IGNCA), Ministry of Culture, Government of India, Bengaluru, India. Her foray into the world of words is through her book: ‘The Maverick Maharaja’ – the definitive biography of the Maharaja of Mysore Jayachamarajendra Wadiyar, published by Harper Collins India in 2022.

Read more about the author at:
www.deeptinavaratna.net 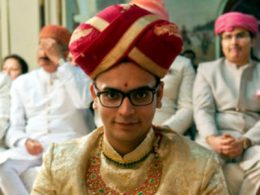 Yaduveer Krishnadatta Chamaraja Wadiyar is the twenty-seventh custodian of the erstwhile Royal family of the Kingdom of Mysore.

His primary education began at the Vidya Niketan School, Bangalore. He graduated with B.A. Degree at the University of Massachusetts, Amherst, in the U.S.A. with major in English and Economics.

In modern times, with the shift in the political landscape and in the moving of administration, the Palace, Mysore, has focused its efforts to be a center for heritage of the Deccan and continues to stress always the importance of history, culture and tradition of the state. The traditions and practices of the palace, Mysore are unbroken for over 400 years after inheriting the same from the Karnata (Vijayanagara) empire, whose legacy is embodied within that of the Wadiyars of Mysore.

The Palace, Mysore has always strived to highlight these traditions as part of the vibrancy of our state and it the view of the current custodian that the rituals, culture, and heritage of The Palace should remain of paramount importance. Alongside the continuation of the Mysore tradition, Sri YKC Wadiyar also has aligned with causes that promote wildlife conservation, environmental protection, and access to education.

Sri YKC Wadiyar is married to Trishika Kumari Wadiyar, who hails from the Dungarpur royal family in Rajasthan and have a son Aadyaveer Narashimaraja Wadiyar.