The Inheritance Of Loss – Jallianwala and After 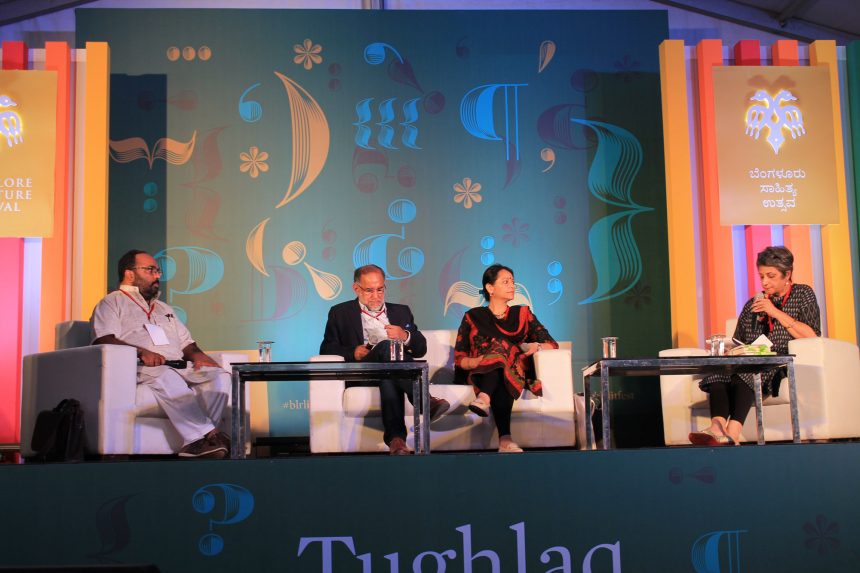 The session, “The Inheritance Of Loss – Jallianwala and After”, saw a sensitive and poignant discussion on the Jallianwala Bagh massacre, among writers Amandeep Sandhu, Manreet Sodhi Someshwar, and Navdeep Suri, moderated by Preeti Gill.

The attendees of the session were grave and solemn throughout, reflecting the sensitive nature of the topic that was being discussed – the Jallianwala Bagh massacre and the period thereafter on its centenary year.

The session started with Navdeep Suri relaying the story of what led to his grandfather, Nanak Singh’s poem “Khooni Vaisakhi”, which was written after he survived the Jallianwala massacre while two of his best friends died. He then went on to tell how this poem survived the British ban, loss of manuscript and the test of time to come to us today in its English translated form.

Describing his grandfather’s poem on the massacre, he said,  “It is a piece of contemporary history, defining a genre of protest poetry”.

Navdeep Suri also reminded the audience about the incidents that led to this dark day in Indian history. He said how four days before the massacre, Ram Navami was celebrated by all Indians irrespective of religion and caste and how this unity irked the British as they saw it as a failure of Divide-and-Rule policy and this, he said, is what led to Jallianwala massacre.

Preeti Gill then asked him about the current state of the Jallianwala Bagh memorial at Amritsar and Navdeep expressed his disappointment about the lack of pathos and emotions in the way that it was constructed. This drew agreement from everyone on the panel as they lamented how the government had failed to properly honor the memory of this catastrophic event.

The discussion then brought in Manreet Sodhi Someshwar, who gave a female perspective on the violence that was unleashed. She put forth an important fact that can be seen in most cases of violence against women in times of conflict; there is a lack of data, and if there is data, it is only numbers, not stories or experiences. She remarked that most literature on violence against women spoke of it only through euphemisms- like they write that women were badly used instead of saying they were sexually abused , violated or raped.

At this point Amandeep pitched in to share his own experience in this regard. He narrated how he had travelled to various places to write about women and their stories and no one came forward to speak to him because he was a man. He was only able to get male perspectives but the women invariably refrained from speaking to a man about what had happened to them.

He then gave an example of  Operation Blue Star to show the villainization of Sardars. He remarks how the ‘ji’ (in Sardarji), a mark of respect used in the earlier years for addressing, was dropped to demonize Sikhs and show them as terrorists and traitors by the then government.

In conclusion, the panel agreed that both State and Central Governments had not done enough to commemorate the Jallianwala Bagh massacre. We are a nation of great conflict and even greater history and all three speakers made it a point to educate the audience about the stories of Punjab, its sacrifices and greatness. It was an inspiring discussion and an appropriate way to mark the centenary year.

Pashmi Dutta is a reader, writer, political enthusiast. Trying to talk with ease about things that make us uneasy, she has her blog at PashmiBlog and currently writes for TheSeer.