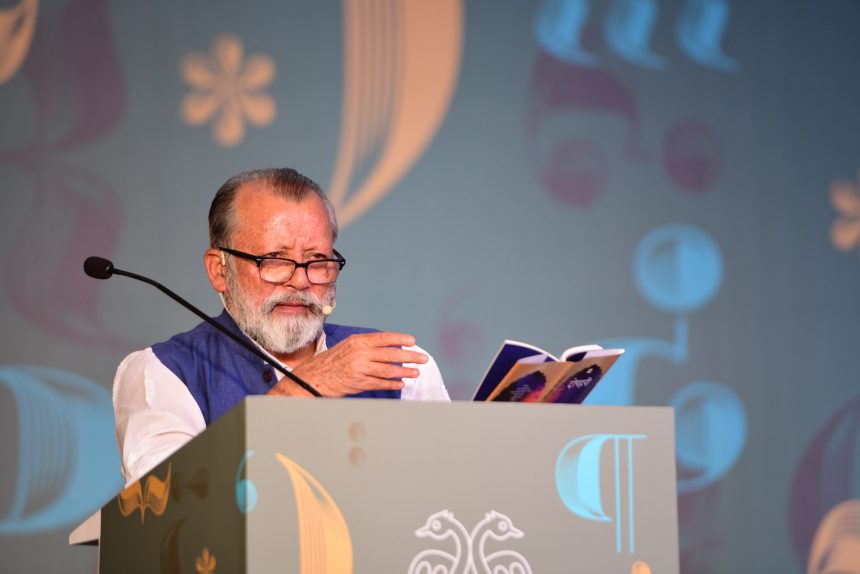 One of the first sessions of the 8th edition of BLF begins at the Tughlaq, venue named after the popular play written by Girish Karnad. Who could be more apt but Pankaj Kapur, the eminent theatre personality and a very popular screen actor to grace the venue for the reading of his debut novella Dopehri.

Dopehri meaning an afternoon is a story of a journey of an old woman, Amma Bi from dealing with loneliness in her big mansion to self realisation. Though the storyline seems to be intense, as Pankaj starts reading you cannot stop smiling, laughing intermittently. Be it her (Amma’s) way of chewing pan, looking at the door waiting anxiously for clock to tick 3 in the afternoon or her banter with her house-help Jumman, it’s no less than watching a movie on the screen with Pankaj impersonating them in his fine baritone. The story written in Hindi and Urdu has a poetic flow, detailing every character with a humorous quirk. Not only humans but intangible things like sunshine, the big mansion door, the age old car in the porch have a significant presence in the story as Amma Bi addresses them in her thoughts and observations to cut through her loneliness.

As Pankaj shows a great sensitivity towards the emotions of the story characters, so does he for the audience and the world in general. He believes that irrespective of the era and the circumstances we may be in, freedom of speech, freedom to think, to choose and to live should always be protected. Before starting the reading, he expresses his concern over the notion of environment and religion through two poems.

The first one tells the unfortunate incidents of degradation of nature and environment where the moon is surprised to see what the humans have made of the earth -“ghoorta raha chaand ghoomti zameen ki taqdeer ko“. The poem ends at a pensive note where even the god wonders of his creation- “kya mene banaya tha, kya inhone bana dala“.

The second one talks of our interpretation of the religion and whether the religion is affecting us or the other way round. He engages the audience by asking them to repeat after him the titles also the refrain in the poem – “sukoon mile“.

At the end humanity is above all and which he puts as “Insaan insaan ka ho jae to sukoon mile”.

The novella published by HarperCollins is a story he has been enacting on the stage for a while now. Motivated by some of his theatre friends and his wife Supriya Pathak, he penned it down as literature. Pankaj debuts in the world of books through Dopehri and is full of hopes when he says “It’s the sunshine that cuts through the darkest of the night.”