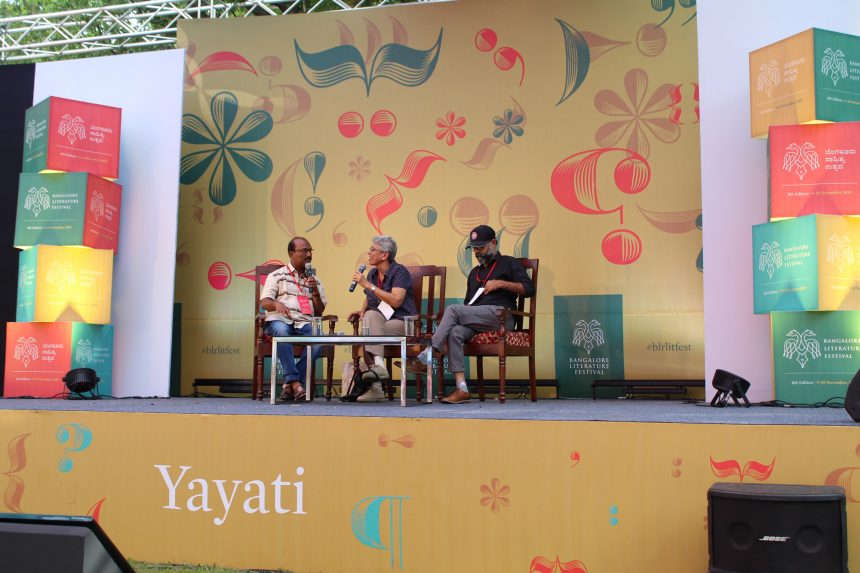 So much is lost in translation. Yet, it is equally true that words can only take flight when they reach a global audience. The session ‘Putting Kerala On The Literary Map’ involved the moderator, C.K. Meena in conversation with Malayalam authors, Johny Miranda and Unni R (stage name of Jayachandran Parameswaran Nair) and endorsing the benefits of translation. Ironically, the rawness and earthiness of Unni R’s and Johny Miranda’s Malayalam responses were lost, when they were translated in English to the audience.

The virtues of translations were expounded by both Malayalam authors present on the stage who gave a window into Kerala’s rich history with translation. Unni R educated the audience further on this when he highlighted how Kerala was the first state in India to translate Marx’s Capital.

However, both the authors expressed that though Kerala openly embraces translations of all literary works, Malayalam novels themselves were not translated into other Indian regional languages or English if they were not recipients of any award. This has the consequence of limiting the scope of many Malayalam novels. The session also saw the authors crediting publishers like Westland and Amazon, for opening up Malayalam literature to the World.

A noteworthy moment of the session was when Unni R expressed his relationship with the city of Bangalore. In his own words, “Bangalore used to mean good weather and Brigade Road to me, now it is the city where Gauri Lankesh was shot”. He seemed to be commenting on the general animosity that is prevalent today towards writers or factions that don’t subscribe to popular opinion. After this comment, he was quizzed on his political inclination by the moderator, to which he expressed that he shies away from being in the left-right political spectrum. He also spoke on how important it is to be a humanist at present, hinting towards the situation in Kashmir. When he refused to comment further on the situation, the moderator, C.K. Meena immediately quipped, “when you say that you can’t say about something, you are actually saying something”
.

Throughout the session, there was a general census that translation is important in this age of globalization and that it  gives power back to the writing from the author and the language. This took me back to Roland Barthes, ‘Death of the Author’ where Barthes argues in favour of the literal death of the author to bring writing in the forefront.

About the Author: A wanderer at heart, Vibhuthi is the author of Rainbow, an anthology of poems that was published in 2009 by Nishaganti Publication. She currently writes for TheSeer.