A Life Told Through The Body 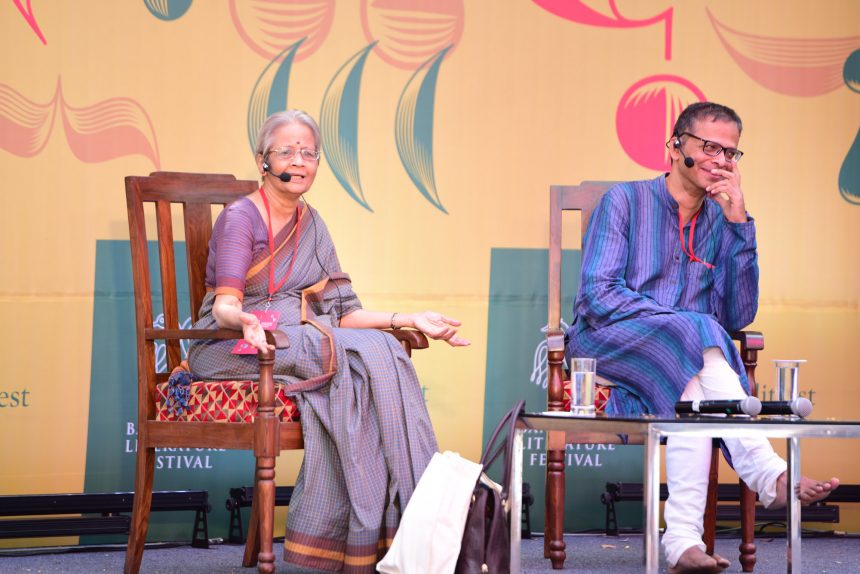 There was an immediate comfort between the two panelists on the stage and Jerry was quick to reveal that he knew Shanta for over 30 years and the discussion kicked off on a familiar note with some personal fun anecdotes and laughter. They first discussed her book, ‘The Engaged Observer’- a collection of writings, how she came about writing it and her writing process in general. Shanta was casual throughout the conversation and made it seem like an easy job. She spoke about how the stories came to her at different points in her life and how she lent a voice to it.

Jerry then went on to tell us how he prodded and persisted Shanta over many years to write her memoir which we now have as ‘One Foot On The Ground: A Life Told Through The Body’. Shanta went on to tell us how she has rather poor memory and can’t remember a thing let alone write a memoir. And then she quickly added, it all came to her one day in the form of a distinct memory. She could suddenly taste the feeling of blood and iron in her mouth just like she did many years ago after a tonsillitis surgery. That one memory triggered her onto many more like her first period, her first tooth extraction and many other physical struggles. That string of thought is what became the structure of the memoir.

Jerry then asked her about her precise process of writing, to which she candidly joked if he wanted the real process or what he thought it was. Shanta revealed that for her, the structure is of utmost importance, details come in later. Interestingly she said that she never thinks about the ending of her story and lets it come to her as the story progresses instead of building the story around the ending. I thought that was a great lesson for upcoming writers.

Next, they talked about one of her oldest books released in 1995, ‘Rita Welinkar’. She candidly remarked how she was privy to 4 extramarital affairs around her at the time and tried to convince each one of those women to let go of their respective men but to no avail. She then decided that if no one was going to listen to her, she would write a book about it! And that’s how we got ‘Rita Welinkar’. She then said what I thought holds as much today as it did so many years ago, that her feminist friends judged her for her thoughts. She felt distanced and different for voicing an alternate opinion.

Shanta’s anecdotes about how all her books came about was an eye-opener and such a guiding light for new writers.