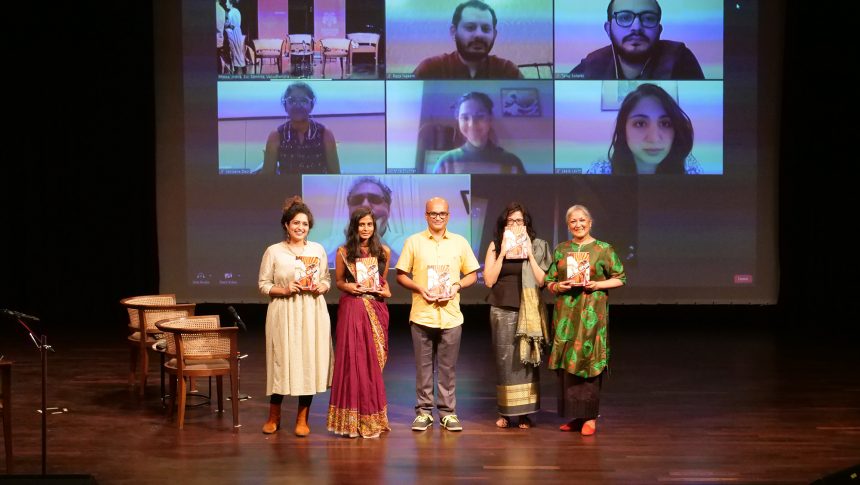 The session consisted of writers and editors for the literary magazine ‘Out of Print’. These panelists included Raza Naeem, Rheea Mukherjee, Samhita Arni, Tanuj Solanki, Vasudhendra, and Zui Kumar-Reddy. The panelists joined in to celebrate the release of the book published by Out of Print which consists of numerous short stories from around the country.

What role did Out of Print play in your literary journey?

This was the question posed by Indira Chandrasekhar, the moderator, and the founding editor, to the panelists. Raza Naeem, a translator, shared his experience with this literary magazine which started about 4 years ago. He spoke about his journey as an Urdu translator and how Out of Print nurtured his passion and interest in translating. Chandrasekhar even described him as a bridge between them and the 20th century Urdu literature.

Next, Rheea Mukherjee, a writer, took us through her journey as a diasporic writer who moved to the US and moved back here. She spoke about the connections she built, other magazines she engaged with, and the people she met thanks to Out of Print. Her talk was followed by Vasudhendra, a writer who too shared his experience with Out of Print as a Kannada writer who got his works translated and published in their literary magazine. He briefly spoke about Kannada literature and then about the quality of translation and editing work that was done.

Zui Kumar-Reddy, a writer, told the audience about her thoughts on the kind of works that Out of Print publishes, which she deemed to be like a library of ideas. She admired the concise nature of the short stories they publish. She also spoke about how it helped her grow as a writer. Tanuj, a writer, was up next. He revealed how in 2010 he was flirting with the idea of writing and stumbled upon Out of Print. After three rejections, he finally got published for the first time which was the start of his journey with this magazine. He spoke very affectionately about how much this platform helped him grow as a writer and the special place it holds in his journey of writing.

Samhita Arin, an editor, came next to share her journey with Out of Print which she experienced from the very beginning of its birth. She spoke about the community of writers that she had joined and her experience in editing so many inspiring works. After this, a few  editors of this magazine joined the session virtually, which included Vandana Devi, Mira Brunner, Leela Levitt, and Ram Sadasiv. They shared their joy about the release of the anthology ‘A Literary Decade’. The session was wrapped up with a very interactive question-answer round which nudged Chandrasekhar to talk about the start of this magazine, the process of curation, the voice it gave to the marginalized communities, and so much more.