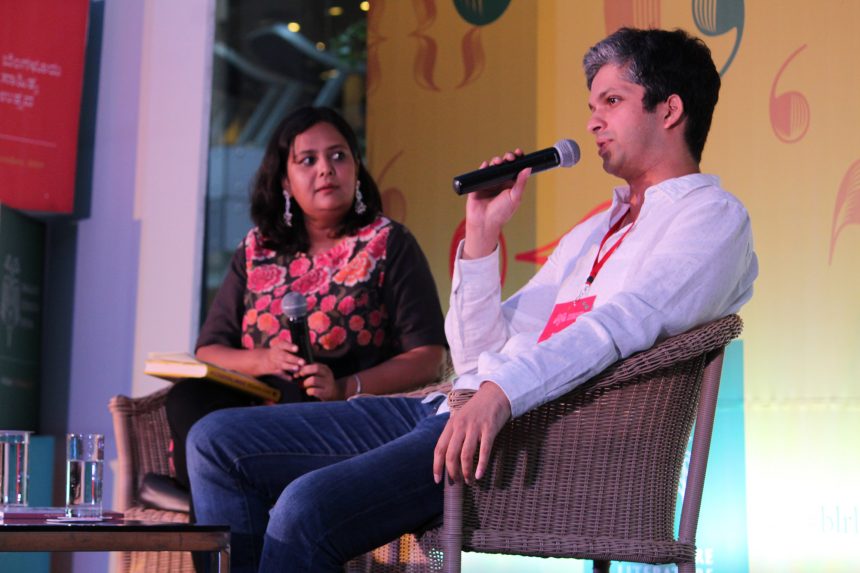 “I can’t stop reading it, being a Harry Potter fan”, was the note with which Shrabonti began. The next thirty minutes saw Keshava taking us through his journey from entering the world of Harry Potter to his work, Accidental Magic, that journeys through Boston, Madras and Bangalore.

During the summer of 1999, when Keshava was in the 4th standard, he won the 2nd prize in a quiz contest and bought the Lord of the Rings, his first self-bought book from the Premiere book shop. “Ek kitab ko dekha to aisa laga”, was his reaction, which took him on an odyssey starting with Harry Potter and Pottermania.

Keshava mentioned that he hated being a child and thought that children are defective adults. This led him to discover and sign up for adult Harry Potter communities, which revolved around fan art and a lot of discussions on the relationships between Ron, Harry and Hermione. He was mostly what people refer to as a ‘Lurker’, more interested in what others had to say rather than writing his fandom.

His foray into writing started when he had a sense of loneliness as a student in the US. Keshava wanted to write about people. This, along with his Pottermania, resulted in Accidental Magic. The seeds were sown in his childhood, because he grew up in a home full of books and had a lot of freedom to read the genre of his choice.

According to him, calling something a ‘literary fiction’ is a serious crime. One needs to read a book like taking a nice glass of wine, not like taking multivitamins or broccoli!

Is the book only for Harry Potter fans?

This was an interesting question that Shrabonti posed. Keshava replied in the negative, saying that Harry Potter fans appreciate the familiarity, whereas the others would appreciate the unfamiliarity, or being able to relate to other aspects such as Boston and Madras.

A glimpse into the protagonists

Keshava gave us some insights into two of the characters – Kannan and Curtis, two very different people. Kannan is in his 20s and goes to the US to do his Masters; his family is defined by the absence of love. Curtis is in his 50s and hosts a radio show. Curtis is Keshava’s favourite character, whereas Kannan comes closest to being a ‘protagonist’, having had the highest number of revisions.

Shrabonti asked Keshava about the genre of books that interest him the most and what would he like to see in young writers. These are the three wishes he put forth:

Keshava read an excerpt from his book, about the Bangalore that Kannan finds when he returns from the US in order to see a girl from Madras in a matchmaking alliance.