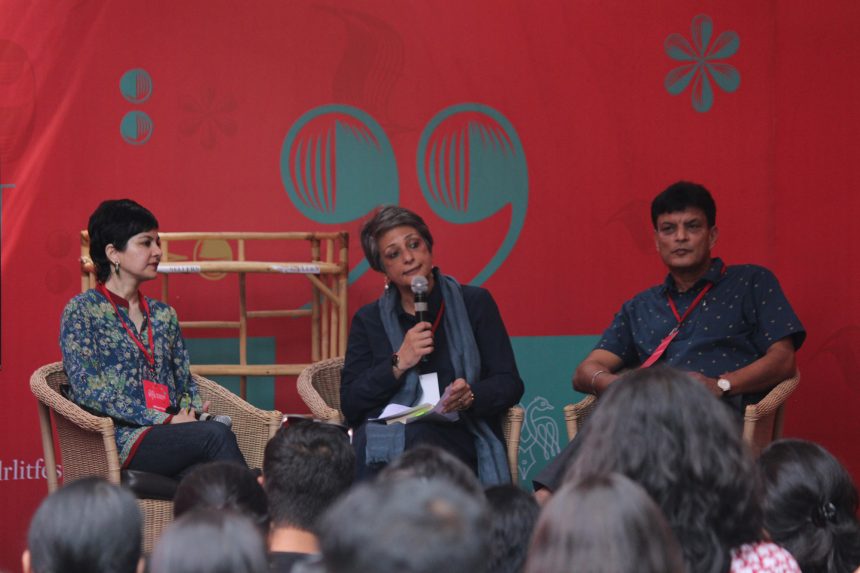 This was a topic very close to the hearts of Jahnavi, Paramjit and Preeti, making this a heart-touching conversation.  “Do citizens of North East need to prove themselves to be true Indians?”was the question they posed.

Each of the panellists has an emotional attachment to the North-East, however, this being a topic which usually does not generate much interest, they were pleasantly surprised and joyful to see a large crowd gathered at The Red Couch.

Where do you think home is?

This was an initial poser before getting into the deeper questions of belonging and unbelonging.

“Nebulous!”, was Jahnavi’s reaction. She has moved between Assam, Meghalaya, and Delhi and shifting every three years since her father was an IAS officer. However, Shillong was her ancestral home for generations and she had a lovely childhood; Jahnavi transported the audience into the beautiful state capital with its wonderful weather. She also spoke of the Delhi she likes, with its neem trees, Lodhi gardens, the beautiful sunset. “Many threads weave together to form home”, she then reflected. Jahnavi came to Bangalore in 1992 to study, has felt a sense of belonging ever since, and is now a writer based here, this being one place where differences are welcomed. “I am gathering some moss and loving it!”, she happily observed.

Paramjit’s parents were from Rawalpindi, moved to India during the Partition, and shifted base every three years. This has resulted in him yearning to belong to a place he can call “home”.

Preeti had an outside-in story to narrate, as part of her experience travelling in the north-east to write about issues of conflict and women. People have asked her, “What are you, a Punjabi, doing here in the North-East?”, which makes her question who an Indian really is, are there any permanent boundaries in reality? Partition is such an example whence a line was drawn, the boundaries changed and it resulted in many insiders become outsiders to India.

Why do people give you a sense of unbelonging?

“Because people are not curious enough”, was Preeti’s comment. She stressed on the importance of knowing about who lives next to you; knowledge brings enlightenment.

Paramjit added on to say that these stories are rarely told, Preeti’s work is a first attempt at bringing out these to the world. He has spent about 9 years in the north-east, his better half is from Shillong, has a lot of Khasi and Naga friends and would like to belong to the place. However, his features mark him out otherwise and that adds to the sense of unbelonging.

The ‘populist factor’, the deep-rooted belief that the “son of the soil” should get recognition is prevalent in various parts of our country. Paramjit gave a few examples wherein the north eastern states are moving towards populism – the Mizoram association is making people pledge not to marry outsiders. The Meghalaya state government has passed an ordinance which mandates outsiders to register themselves if they are staying beyond 24 hours in the state and there is a law in the making about Khasi girls losing their rights if they marry outsiders.

“If we come into populist pressure, the concept of India will be lost” – Paramjit

The audience was so much into the emotions expressed by Jahnavi, Preeti, and Paramjit, that there were not many questions. The parting note was a question, “When you write, what is your primary emotion?” For Jahnavi, they are – a need to express, deep nostalgia, some sense of loss. Paramjit had only one word for it – anguish. A realization of what unbelonging truly means….and a wish for ‘belonging’ to set in soon in an integrated India – these are the feelings that the audience parted with.