Bestsellers – Smart Women Have Hearts Too 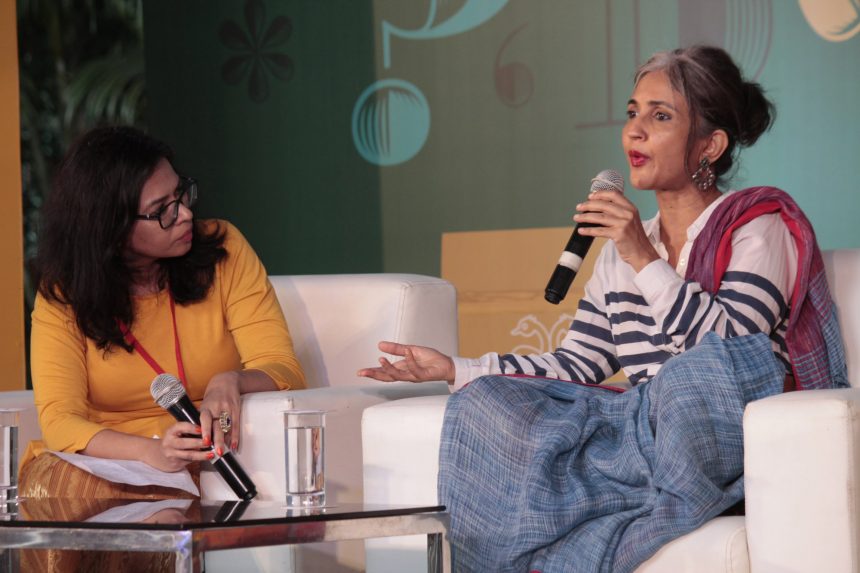 Samhita Arni was in conversation with Anuja Chauhan today on a sunny afternoon at the Tughlaq in the Bangalore Literature Festival. Samhita made a big bang start by opening the conversation with “A fireside chat with the hottest author in Bangalore, a peek into her past work and cue into her future”.

Samhita’s first poser to Anuja was on the subject of her books, which are not just entertaining, but also have substance, history, and politics. In response, Anuja said that she tries to write books which she reads personally. “The vital thing a reader can give another reader is their voice. Your life experiences are your raw data”, responded Anuja, and went on to add that her father having been an army man, her experiences come into her writing.

Anuja confessed that she was partial to autobiographies and hopes to write 20 autobiographical books before she dies! Her book “Baaz” relates to the crushes she had on fighter pilots, “The Zoya Factor” takes on from her stint in advertising and “The Battle of Bittora” storyline is taken from the election campaigns on which she accompanied her mother.

Anuja had some very interesting tips to share on how to cater to diverse audiences. She advocated to write in a light, breezy, bouncy zone, or it will scare the idea away. She suggested to talk to people who are not like you and help to enrich your life. Importantly, she said, “base your characters on traits of people you know”. As an example, she spoke about the grandmother character from ‘The Battle of Bittora’. Pushpa Pandey, the name, was based on her mother’s first name. The character is based on a three-time Member of Parliament from a north Indian village. The traits of the character are a lot like her mother, grand mother as well as her mother in law. There are readers who ask her what is the risk that people might recognize themselves in her books. She ruled out this possibility by assuring that she is good at disguising people, in bringing only traits and not the entire person into her book.

Samhita quizzed her on which medium she leans towards, books or movies, considering that quite a few of her books have made it to the movies, Anuja definitely prefers the written medium since only a book is complete. She then added with a smile that a movie made from a book does have its perks such as the money and being invited to Bangalore Literature Festival.

Samhita gave it away when she said that Anuja is working on a web series for Hotstar that has strong women protagonists. Anuja said that this is a medium close to her since the content has to be really sticky and its structure is different from that of a book.

Anuja reflected on having written five books in 10 years; and felt this is too slow. “I’m no speedy Gonsalves”, she said. She wonders how Agatha Christie has been able to complete 70 books. She quoted that Meg Cabot and Vikram Seth are her favourite writers. According to her, the best compliment an author can get is to be re-readable. Samhita added on the compliment to mention that her protagonists are staunch, feisty women.

In response to an audience question about her transition from the ad world to writing books, she mentioned that self-motivation is the key; she pushes herself to write at least 1000 words a day.

Pepsi’s Yeh Dil Maange More was one of her famous ad campaigns, which was created by building upon Pepsi’s international tagline ‘Ask for more’ and giving it an Indian twist. “Thoda dil daalke bolo – Yeh Dil Maange More”, in her own words.

Anuja advised that advertising was a good start to a career before getting into writing. She mentioned that the ad world crushes your ego, and you become receptive to criticism. Her humorous anecdote about Jemima Goldsmith’s father telling her that Imran Khan would make a good first husband sent the audience into splits of laughter. She spoke about the 3Rs of advertising – Rapidity, Resilience, Repertoire. “Read the masters, read, read and read”, is the one liner she had to say to the upcoming writers. Having been glued to every word that Anuja said through the half hour session, the audience gave a thundering applause, almost as if they said ‘Yeh Dil Maange More’!