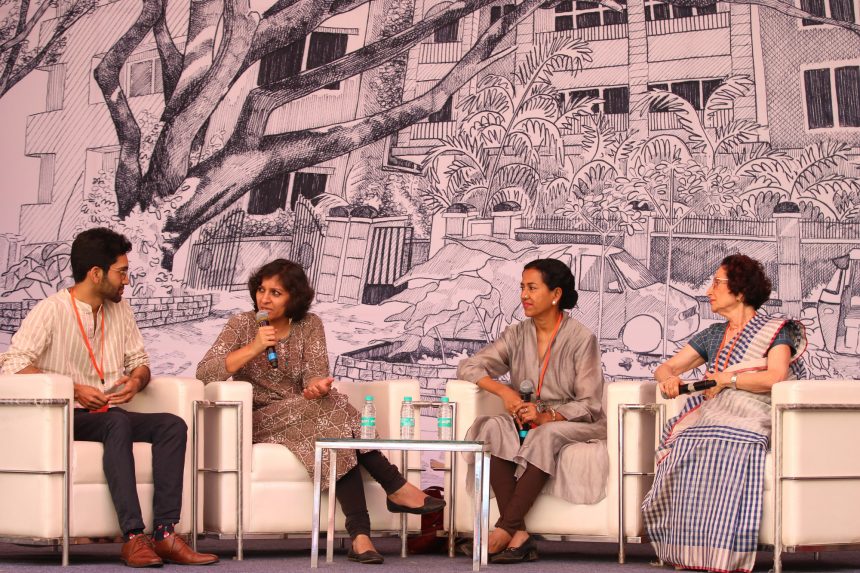 The ‘Naale Baa’ venue of the Bangalore Literature Festival 2018 hosted writers of contrasting styles and perspectives on non-fiction writing. On panel were one of India’s seniormost journalist Bachi Karkaria, author of the award winning ‘The Ivory Throne: Chronicles of the House of Travancore’ Manu Pillai, and Shoba Narayan who has authored the book, ‘The Cows of Bangalore’. In conversation with them was V.K. Karthika, a publisher with Westland Publications Pvt. Ltd.

Bachi Karkaria opened the discussion with her observations about the misrepresentations of the Nanavati case. According to her, thanks to the coverage by the Blitz tabloid, most of the accounts of the entire case have been confined to the romance. So, for her book ‘In Hot Blood: The Nanavati Case That Shook India’, it was important for her to find out people to talk who had lived in the times and could give out information with accuracy. Taking cue from Bachi, Karthika moved to Manu Pillai and asked him about the relevance of imagination while writing popular history.

Manu underlined the importance of research, documents, and other archived materials for a book of his kind and thanks to the British system of controlling the royal families by document every minute details, he had ample sources to refer to for his work. He stressed upon the importance of looking at characters from the past as humans and not as divine. When we do that, we are faced with a lot of small and ordinary facts of their lives that we as ordinary humans can relate to. While making his point, he cited the example of Kerala Varma who is considered as Kalidas in Kerala but has written about his love for Bhang(cannabis) in his confessional letters. These are interesting, often humorous details that we miss out on if we put these figures on a pedestal.

Shoba Narayan began by telling her story that led her to writing her book on cows. It was when she was in Ulsoor that she found a cow in her apartment elevator. This cow in the elevator was being taken for a Griha Pravesh. Soon after, Shoba started taking milk from Sarala, the milkwoman and once she asked for a loan of Rs. 40000 from her to buy a cow. Shoba agreed to lend Sarala a loan only if she would take her to buy the cow. Shoba’s journey with cows began there and she has spent the last 10 years of her life in engaging with Sarala and observing cows. Shoba spoke about the various verticals in which a discourse on cow is made. The first vertical happens to be the importance of cows and if it is only venerated in Hinduism. If one researched, it is found that cows have been venerated in all ancient pre-vedic cultures. The other vertical she stressed upon was the extinction of the native breeds of cows. According to her, although Mr Kurien did a wonderful job, it also resulted in downfall of the native breed. Her book is also about the wonderful economics between the utilization of cow and the love and empathy, people like Sarala have for cows. Another vertical happens to be the cow politics where we have vigilantes who have taken upon themselves to protect cows. According to her, it is difficult to understand the vigilantes who have come from centuries of cow-venerating cultures and communities, in Sarala’s words, sitting inside our high rise apartments.

The discussion moved on to the processes each author had followed to bring their work to fruition and how they zeroed in on to the subjects they wanted to talk about. On one hand, how a case of adultery resulted in a constitutional bench was a matter intriguing enough for Bachi, Manu spoke about the abundance of history available in India and the need to balance the barebones of history with good writing. Shoba quoted poems from the Rigveda about the origin of cows. The discussion was interspersed with humour and packed in a lot of inputs for the would be writers of non-fiction before concluding.

About the Author – Abhishek Kumar Jha is Founder Editor and Writer at www.bookstalkist.com