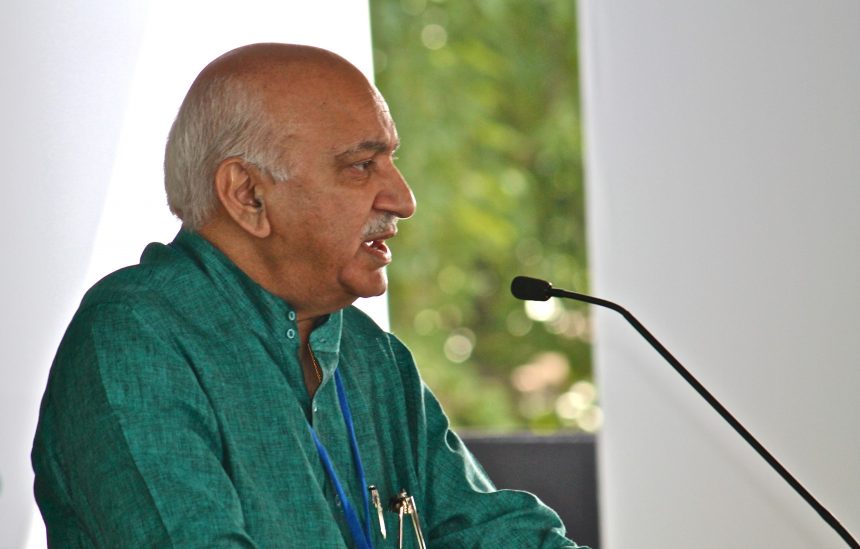 A thought-provoking talk by well-known journalist and author MJ Akbar on the challenges to modernity in India held the audience in captive attention.

The national spokesperson of the Bharatiya Janata Party and the Rajya Sabha MP from Jharkhand began by discussing what he called his genuine belief that India will be the defining nation of the 21st century. He asked the audience, “What makes me make such an ambitious claim? A claim that could be dismissed as ultra-nationalism,” before delving into a bit of the country’s historical background.

He explained that centuries ago, we were a wealthy country; we had science and technology. And that if India began the history of European colonisation, India can begin the history of decolonisation as well. “But the real historical moment is much larger than the collapse of colonisation,” he claimed. Between 1850 and 1950 every single empire known in history collapsed. The Chinese, Japanese, Indian, Ottoman and Russian empires among the world’s greatest empires collapsed. Every single political structure that held the world together encountered this. And as these structures collapsed, the idea of the nation-state began to replace them.

Bringing the discussion back to the present, MJ Akbar then stated that the real challenge of the moment is in finding out what modern nations do with nationalism. This, he said, is where the Indian Constitution becomes the most important document of the postcolonial world and for the postcolonial world. According to him, at its essence, the Constitution defines the meaning of modernism and not merely nationalism.

The prolific speaker noted the key question that confronts and is the cause of so much civil strife, “What is modernity?” He then addressed the question with his take on the word modernity, by enumerating 4 non-negotiable principles of the concept. The first principle he listed out was Liberty, reminding the audience of Voltaire’s words on the same: “I may not agree with what you say, but to the death I will defend your right to say it.”

The second principle he stated as the most important component of modernity – Faith Equality. A European word, Faith Equality comes out of two contexts: one being Voltaire’s and the other being Karl Marx’s perspective. In our country, though, MJ Akbar mused, Secularism is of neither context. “Our Secularism is the equality of every faith before the law. Equality of every faith in social life and behavior. Our Secularism doesn’t belong to the law and is much older than European Secularism.” He continued in the same vein, telling the audience that “India was not secular because Gandhi Ji was secular, Gandhi Ji was secular because India was secular.”

Thirdly, he said, is the principle of Gender Equality – “We cannot be a modern nation without this.” He observed that from 1955 to 2015, there has been a massive revolution in our way of thinking, and we’re doing this on the basis of economic empowerment. He spoke at length about the rising economic empowerment of women in the country.

The fourth and last principle of Modernity, according to MJ Akbar, is Economic Equity. “You cannot be a modern nation if you have extreme poverty of the kind that we have,” he asserted. He said that the challenge of the next ten years is to eliminate poverty. “The alleviation of hunger is a Constitutional requirement and that is why I call the Constitution a modern document. We cannot be content with alleviation anymore, there has to be elimination of poverty.”

On the creation of jobs, the author very candidly said that the Government has to give way for private entrepreneurs. He said, “The real answer lies in creation of a new sector. We need to move away from the binary of Public and Private sector and get into the Personal sector.”

And what happens when you don’t make a nation modern? For the many nations that don’t have any or all of the four principles he listed out, MJ Akbar said they enter something called the Romanticization of Regression. He explained, “You romanticize the past, an imagined past, to create legitimacy for the present.”

Touching upon the subject of Faith Supremacy, he said, ‘”Those of us who want to protect our nation’s modernity ask: what is a minority? Minority and majority are not a function of numbers, they are a function of empowerment. A community that feels empowered does not consider itself a minority.”

In terms of addressing challenges to modernity, MJ Akbar explained that the answers are embedded in history which we as a country must raise without falling into a trap of regression or partisan, etc. “The past is not a source of anger. The past is a source of learning in order to protect the future. If we can’t protect the future we have failed ourselves and our children.”

He ended the session on an optimistic note with a thought he shared at his parliament speech as well, “Are we, as political parties of modern India, going to fight each time the last election of the last 25 years or the first election of the next 25 years? Do not fight the future. What are you going to do about 2050? People are not interested in what you did about 1947. Unless you address the concerns of the young, how can you create a future for them? If we can get the narrative right, we can finally live up to their expectations.”