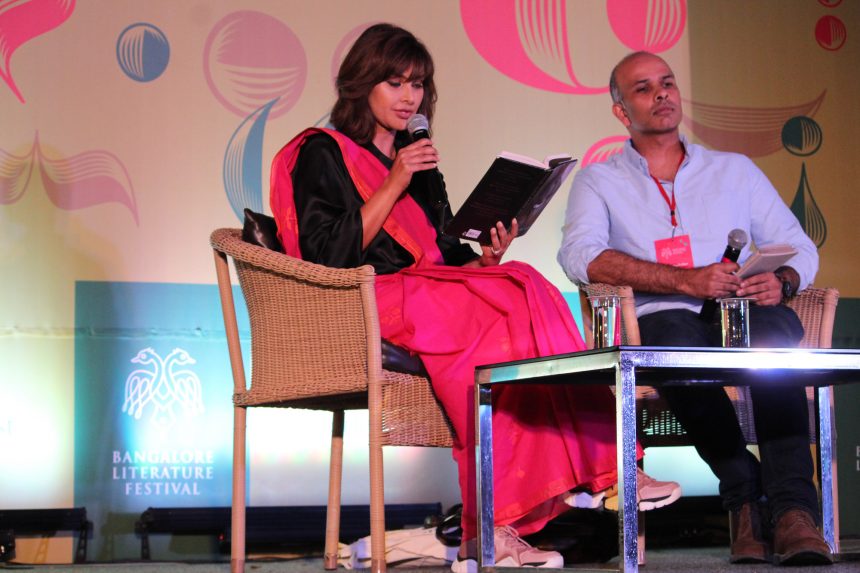 With the labelling of ‘Close to the bone’ as a cancer memoir by the literary world and the rest of it, Lisa Ray challenged this idea by speaking extensively about the trials and tribulations that she had to survive through the traumatic events that encircled her at the beginning of her professional career.

Mahesh began by speaking about the lifetime of work that Lisa put into the creation of this book. To emphasize, she’s lived through different lenses and in different roles, such as that of a model, actor on the big screens and on television and also as a writer. Before responding to the statement made by Mahesh, Lisa showed her gratitude to the audience and appreciated their personality as a bibliophile and was also very glad about the positive reception that her book has gotten from the public. She spoke about the storytelling style of the book and to put it across to the audience that hasn’t really looked into the book, Lisa took out her book and read from it.

Her narration began with a setting that’s homely in nature but it quickly transitioned into a metaphor that created a dichotomy within the life of Lisa, as she was deemed to be a “vamped seductress” and/or “virginal heroine.” The essence of the book lies in the fight to survival that Lisa put up against the bone-chilling ailment of cancer, as it is seen through different perspectives from different parts of the world. The misconceptions that she had had to face in the Indian media as a “diva”, “hottie” and many synonyms that induce and evoke the same promiscuous meaning had to be eradicated. As she recalled an account in which she was told by a fellow model that her looks and her body were to be intact and pretty because at the end of the day the commodity that Lisa was selling in the market was in fact, Lisa. This created an illusory perception of herself as she read from her book, “there was no refuge for me from this casual sexism.”

Mahesh commenced a “therapy session” as he spoke of Lisa’s childhood, specifically at the age of fifteen when she left her home in Canada and travelled alone to Croatia in pursuit of a boy and stayed with people she did not know and lived a nomadic life. A transition occurred when she was in Bombay, infiltrating the industry and its several layers at the age of sixteen. Lisa justified this with the existence of an inner philosophy that “life is for me and not against me.” This is a hereditary thing as she spoke about the nomadic and adventurous lives of her parents, a Bengali brahmin meeting and marrying a Polish woman in the 1960s where it was not only considered an unconventional practice but also one that was frowned upon. Their philosophy was to simply question their culture and “create a new one.”

She spoke about the traumatic incident which took place in Canada a week before the start of her university when her mother had gotten into a life-threatening accident, to say the least, but also at the same time she was being branded as an icon and a model at the other side of the world. Posters of her in bathing suits pervaded the Indian masses and she got offers that would set the trajectory of her life towards the stars occurred at her doorstep at the time her mother’s feet were almost out of the same door. This contradictory situation invoked a sense of quest in her. She wanted to beat the stigmatised version she called “the receptacles of men’s desire” and set out on a quest to unravel herself and the mysteries of her life.

She concluded by stating that though she is perceived as a celebrity, she is a human at the most basic level so she questioned the idea of the book being a celebrity memoir. She spoke of a connection between the mind and the body and how this cannot be quantified but must be delved into and embraced.

About the Author: A self-proclaimed meme lord that barely makes any but laughs at many, all Vishal Bhadri does is read, listen to music, and cry during both the activities. He stans on magic realism and devotes his time primarily deciphering the auriferous works of Salman Rushdie. (a stan, needless to say). Vishal has a poetry blog called Memory Palace that has all of his two poems in it.  He is doing his triple major in Communications, Literature and Psychology at Christ University. He currently writes for TheSeer.