Club You to Death – Anuja Chauhan with Niret Alva 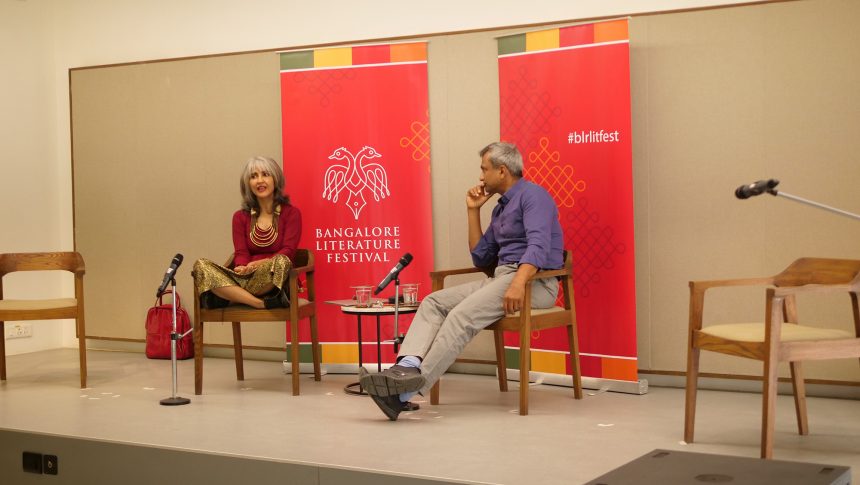 It was an animated conversation between Niret, an award-winning television journalist, producer; and Anuja, his wife and the author of five best-selling novels who moved from advertising into writing; they have 3 children plus a few dogs and cats. Niret opened with a question on how the lockdown has been, to which Anuja quipped that the lockdown made her want to murder people!

Niret asked Anuja how she takes her writing from concept to completion. “It is lonely, I go into a cave”, said Anuja, and added that she does a lot of chatting with people to get inspiration. The “percolation process” is when it all comes together.

Inspiration for Her Characters

Niret asked if she gets worried that her family might unearth characters which are based on them. Her immediate response was, “No, people don’t recognize themselves”. She disguises her characters so that the resemblance gets blurred out. For instance, a cook she knows becomes the character of a megalomaniacal drug lord.

Anuja started writing romance and is now shifting to the whodunit genre. Niret’s poser to Anuja was on how this shift occurred. Anuja revealed that she got feedback that romance does not exist in real life. It made her think, “Is it with rose-tinted glasses that I’m writing?”. It led to her altering course a bit, in order to give romance along with something more realistic.

Club you to Death

Niret read out a blurb from her book Club you to Death, to be out in the summer of 2021. Anuja revealed that it is set in a posh club and hence ‘club’ in the title.

Anuja then read out an excerpt from her book – a little was not enough and Niret urged her on to read more. This led to a very interesting segment of the session which built up the mystery and the anticipation of her book. The book is about privilege – class, caste, social hierarchies, hypocrisy.

Balance is important, it is the key to everything, said Anuja. By balance, she meant a mix of humor, depth, frivolousness. She expressed her satisfaction in having good critics in her house, who egg her on to do a lot of deleting and thus help refine her books.

Quizzed on whether ACP Bhavani Singh would continue as a character in a series, Anuja said she loves ‘cozy crime’. Hence, ACP Bhavani is an old-school character; people love opening up to him, so she sees a lot of scope in continuing with his character.

Anuja went on to say that she is a huge fan of Agatha Christie; there is a dedicated bookshelf at her home for Agatha Christie’s books. The fact she loves about such old-school books is, “in two sentences they bring a person alive and they pull the killer out of a hat”. Anuja likes books that one can get engrossed in, sitting by the fire, sipping hot chocolate.

Anuja admitted being selfish in saying that lockdown has been a good time for her. It has been a blessing for her, a time when she could get into her escape hatch and be there.

Her Advice to Aspiring Writers

Anuja spent 17 years in advertising, which is a world that demands quick creativity with boundaries. Whereas writing books is the other side that gives complete freedom of fiction writing. Screenplay is in between – you get more freedom than in advertising and is a ‘different crayon box’ of writing, music, visuals coming together.

How does Anuja get her cues for books?

For Battle for Bittora, it was a visual cue. Sometimes, ‘what if’ becomes a cue, for e.g. ‘What if a girl is lucky for cricket’ was the cue for The Zoya Factor. Anuja went on to add that she desists from getting down to the last level detail of anything which can stifle the reader’s imagination.

Inspiration for ACP Bhavani Singh – was it Miss Marple?

Not exactly, said Anuja. It was more of her ‘mama’ in the police; maybe a glimmer of Miss Marple could have come into the character. ACP Bhavani is from the ‘cozy’ genre, old-school.

Would Anuja write a book inspired by Remington Steele?

The mention of Remington Steele made Niret get nostalgic. He mentioned that he was a great fan of the series, loved it when Pierce Brosnan became James Bond and wishes the series would come alive on OTT again. Anuja added that she would love to write inspired by the series.

The clock had ticked by, it was now time to close; the session ended on a note that, this being the third time for Anuja and the first for Niret, they both had a great time!