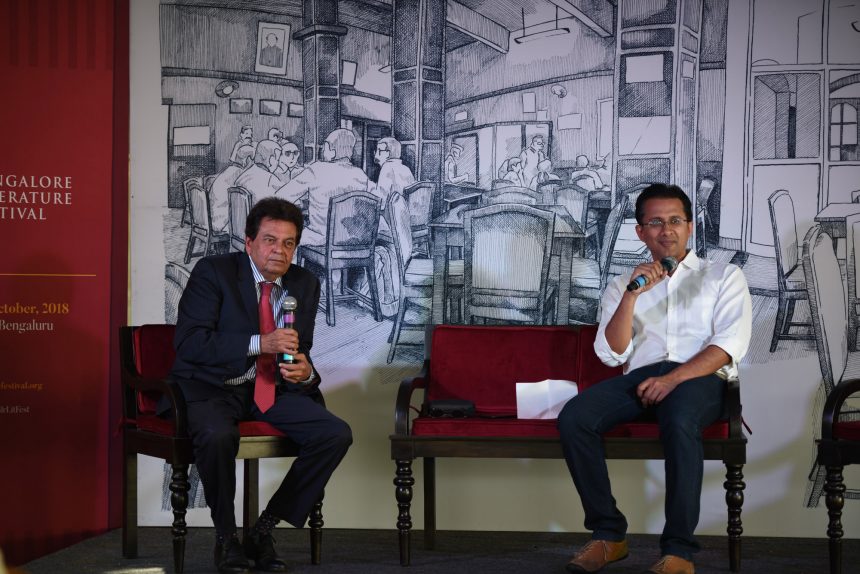 While you are stuck in namma city’s inching traffic and wondering when you can afford your own private jet or even better evolve to develop wings of your own, here was a session that transported back to the colonial times with instances where children and adults alike used to take ponies to schools. Joshua Mathew and Michael Ludgrove took the audience back to a colonial Bangalore that us Shikari Shambu lovers can barely fathom.

Joshua Mathew is the author of “The last white hunter” – a book dedicated to the hunting trials and tribulations of Kenneth Anderson deemed to be the Jim Corbett of South India. Karnataka is home to one of the most diverse wildlife sanctuary, Bandipur and most of Anderson’s hunting sojourns were around these areas. Michael Ludgrove is an art curator and shares a lot with the Anglo Indian community and its history in Bangalore. Ludgrove’s interest in Anderson was largely a result of him wanting to understand his father and uncle’s life, his search for understanding the Anglo community and life at his Alma Mater Bishop Cotton’s school.

When asked why he wanted to write this book, Joshua expressed that he wanted to explore a bygone era of the 40’s and 50’s of colonial Bangalore through the lens of the colonial hunter. Anderson was nothing short of a hero who primarily saw hunting as a hobby. He had a well-connected network of village locals and tribals whom he always liased with to hunt down a menacing tiger or panther. This is a legacy that Joshua thought shouldn’t be missed. The session was conversational, full of interesting snippets from the audience many of whom were themselves alumni of Bishop Cotton school and some of them even knew Anderson personally.

About the author: Monica Kamath is a curious being who strongly believes that a right time, right place and a right person can create wonders. True blue Bangalorean, a multilinguist who can speak more than five Indian languages, love to understand people, dialects and cultures. Largely an introvert but can masquerade as someone otherwise if she chooses to. Literature and poetry keeps her grounded and sane in this ever busy, technologized society. She has a bad habit of getting herself involved in at least three or more pursuits at a given point of time. Blog link – https://medium.com/@monicskamath. She currently writes for Bookstalkist.