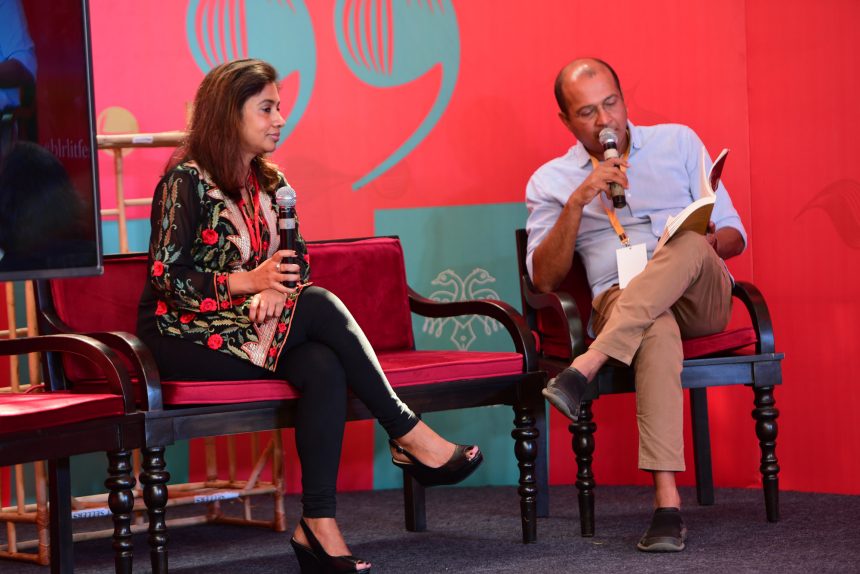 Disambiguation of the persistence of colour and society’s dependence on the same for determining an individual’s thoughts and actions is much needed today. The trials and tribulations of time and history are a testimony to that. Artefacts predating the 20th century are witnesses to the struggles between race and ideology and their ramifications on different communities with different cultural and religious associations, some personally made and some by the vicissitudes uncontrollable by the mortal being.

Anuranjita Kumar sheds light into this subject through her eye opening book of anthologies that centres around her personal experiences and also offers perspectives from different lenses within the society. The session starts on a lighter vein with the author Anuranjita and the moderator of the session, Subodh Sankar remarking on the pleasant weather of Bengaluru and comparing it with the toxic air quality in Delhi, which evoked a hearty laugh from the audience.

The theme of the session was set when Anuranjita asked the audience to guess her association to a sect from her surname, which has certain ambiguity in its association with several communities across India. Providing an anticlimactic answer after listening to the several opinions provided by the audience, she went on to highlight the importance of a surname in society as certain predispositions are established upon acquiring the knowledge of one’s surname. To create an air of resistance against this stigmatizing ideology and alluding to Baudrillard’s idea of simulation, she spoke of how her surname “Kumar” has ambiguity around it in order to make sure that her identity and its further associations are not conducted on the basis of her surname, which implies that the social structure is not adhered to. She spoke of the common practice of one’s identity being defined by their surname and its detrimental effects in the society. As she said aptly during the session, “once your surname is revealed, unconscious inherent biases are already working.” She also remarked that surname came into existence to help people organise information.

Through the idea of reflections, Colour Matters is a concoction of stories that speak of the consequences of racism in one’s life by presenting several accounts from different sections of the society. In the book, the author Anuranjita narrates several disheartening incidents that takes place during people’s attempt at migrating to foreign soil. Each chapter of the book begins with the letters that make the word Colour.

The first story, Connect speaks about the life of Sunita, a maid-servant who is hesitant to share her food with another person due to the latter’s religious association and the hierarchy set in place, thus questioning the humanity of people who creates disparities due to race, religion and other socio-cultural factors. Second part, called Openness has an interesting story by the name of Are we scared of Muslims?

In the session, Anuranjita drives across the fact that race, religion and such stereotypes should not be the determinants of an individual’s capability and prospects in their life. Her academic background in Psychology, helps her to find a reason why such stereotyping exists; she alludes to Abraham Maslow’s theory of the hierarchy of needs, stating that when there is a need for safety and security, there inherently exists an “Us versus Them.”

“For someone to be superior, someone has to be inferior” is the statement Anuranjita concludes the session on, giving the audience food for thought. The question and answer session saw discussions on Lacan’s theory of psychoanalysis, which offers an interesting take on moulding of an individual and their association to things created during the mirror stage.

To conclude, the imperialist idea of Us vs. Them, Superior vs. Inferior persists within our society and has taken form through the means of racism and this needs to be eradicated for peaceful coexistence.

About The Author: A self proclaimed meme lord that barely makes any but laughs at many, all Vishal Bhadri does is read, listen to music and cry during both the activities. Vishal has a poetry blog called Memory Palace that has all of his two poems in it.  He is doing his triple majors in Communications, Literature and Psychology at Christ University. He currently writes for TheSeer.