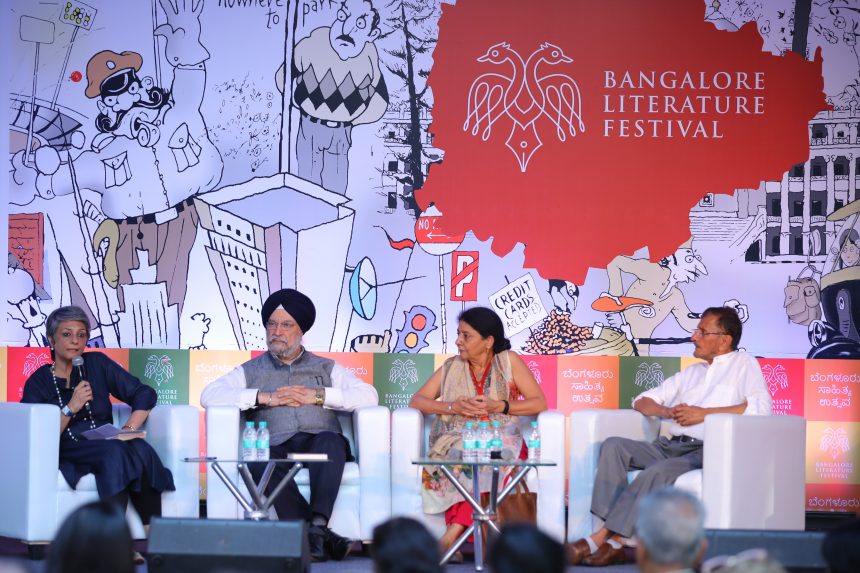 While the session was titled ‘Festering Wounds – The 1984 Riots’, Preeti Gill, who is an independent editor and literary agent and someone who experienced the horror of 1984 first hand, broke ice with the panelists suggesting that to address the ‘84 violence as riots would be a tremendous mistake. According to Gill, it was a premeditated ethnic cleansing and a pogrom. She spoke of her brush with the 1984 violence and narrated how she was spared only because she didn’t wear any identification mark of a Sikh.

Drawing parallels with Hardeep Singh Puri’s book ‘Perilous Interventions’, Gill asked him about Indira Gandhi’s interventions in the making of Bhindranwale. Puri, who is the current Union Minister of State with Independent Charge in the Ministry of Housing and Urban Affairs and has been a 1974 batch Indian Foreign Service officer who served as the Permanent Representative of India to the United Nations said that there was no doubt that the Government of the day had presided over the killings. About 4000 sikhs were murdered in cold blood and it took 6 months for an enquiry commission to be set up. Putting the commission head in the dock, Puri claimed that the chairperson’s method of enquiry was complete perversion of justice. Answering Gill’s question on his first reactions to the news, Puri mentioned that he was in Geneva at the time and his first response was of bewilderment and an inability to comprehend the situation.

Taking the discussion to author and former IPS officer Kanwaljit Deol, Gill invoked Deol’s book ‘The Year of the Hawks’ mentioning that the sentiment of being wronged perhaps still exist and the youth could still flare-up. Deol emphasized that her book was a fictional account hovering over a sequence of 3 events – Rise of Bhindranwale, Operation Blue Star, and the 1984 killings.  Deol wanted to explore the rural landscape discussing events that could lead up to the youth picking up guns. She also wanted to allay the misconceptions that the ‘84 violence had anything to do with the Khalistan movement. “Khalistan movement was a post 1984 thing. Upto ‘84, Bhindranwale was raised in the same fashion as that of today’s Ram Rahim”, she said. Deol also added that it was important to understand that the Delhi Police also felt complicit in the assassination of Indira Gandhi and this amounted to them not performing during the violence outbreak. While there were individual acts of compassion too and many policemen tried their best to help people, the people in important positions failed to act. This was found during the course of Ved Marwah’s enquiry.  All we have today is anecdotal evidence which isn’t going to help in closure. The theory of absence of a moral compass in administration and polity was exaggerated.

NS Madhavan, writer and former civil servant, spoke about his book which is interestingly titled ‘When Big Trees Fall’, inspired by Rajiv Gandhi’s statement post ‘84 riots. Madhavan was working in the Ministry of Defence at the time and narrated the entire ordeal starting from the news of Indira Gandhi’s assassination to the outbreak of violence. According to Madhavan, if one looks at the sequence of events and the presence of rioters on the streets of Delhi right after the assassination, one can infer that the it was a preplanned conspiracy and not some kind of spontaneous reaction.

All the panelists concluded that the wounds would continue to fester until a closure is brought to the issue. Madhavan put a heartening question to the audience and the panelists as he wondered if we as a nation have still understood the willful usage of state-sponsored riots as a legitimate political tool and strategy. Deol making her end remarks in response said, “…if one had to think about the nation and the title of the session, our country is now perhaps a nation of festering wounds. As riots become an important part of polity, we can only try to become more educated and not get incited by the doings of it.”

The 1984 killings shall remain a blot on Indian democracy and this blot is only going to spread further if justice is not delivered. As of now, we are waiting and the blot is widening.