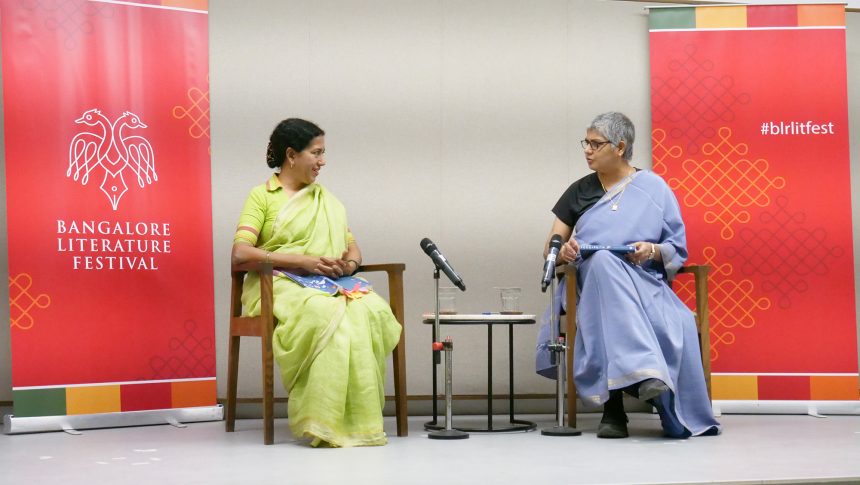 Mani Rao started off the session by giving an introduction about Shoba Narayan and her writing techniques. Upon discussing her versatile writing style, her various interests, and her works, she prompted the discussion further. Shoba Narayan, aided by Mani Rao’s questions and thoughts, explored the connection between food and faith, just as she has in her book with the same name. In today’s session, Narayan talked about Prasadam (sacred food) that is served all over the country in different temples. She made it clear that she covered many places of worship, not just Hindu temples, but also other sacred places like Churches.

Narayan narrated her experience in deciding on these particular places that she would visit and write about. She looked for places wherever there was a deep connection between religion/faith and food. Through an intense discussion, she conveyed her thoughts on how the connection between faith and food, regardless of which religion, is intimate and powerful.

Narayan took us on a journey across various regions all over India, each and every direction. Engaging with her, we traveled from Bangalore to all these different places like Madurai, Udupi, Kashi, Ajmer, Goa, Puri, Amritsar and so many more.

Later, the discussion steered towards the method and technique she had adopted to make this book a reality. She gave insight into the style of the book which is similar to a travel memoir, along with intense research work. As a writer and a columnist about everyday topics like food, travel, fashion, etc., she revealed that she adopted a similar method by drawing many ideas and research from her articles.

She talked about how in the book, she draws from her experiences with a lot of countries that she has visited which carry the remains of old civilizations, like Greece, Egypt, and China. She compared and contrasted these different cultures with India. She talked about how India has sustained older civilizations and religious practices, which acted as a catalyst when she was trying to decide on the content of this book.

Rao comments on Narayan’s belief that she is a “skeptical seeker on a pilgrimage.” This fueled an intense discussion about her religious beliefs and how this journey shaped that belief system. Narayan also shared many anecdotes about her numerous experiences as a part of this journey. These tales gave us an insight into the working of these temples and how they produce Prasadam, how they perceive it, and their beliefs. These experiences, we could clearly see, changed her entire thought process about faith. She also talked about how she learned to respect the different places and their working, but also critique problematic approaches without being offensive.

Later, she revealed to us that she was driven to go on this journey and explore this connection because she was interested in finding the inner truth far more than focusing on different doctrines prevalent in India. Towards the end, she also briefly covered the working of these different places of worship through a feminist lens. The session concluded with a very interactive question-answer session.